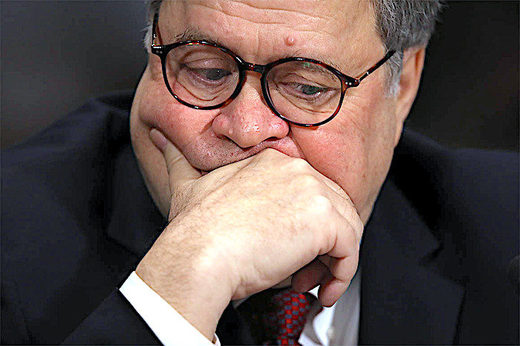 When asked if William Barr has the guts to do what needs to be done, a semi-famous conservative Twitter pundit answered that Barr has the guts, but what he lacks is prosecutable crimes. Wait, what?

If this seems like utter nonsense to you, you are not alone. It is nonsense until you consider that successful prosecution also requires an unbiased jury willing to convict. The point might have been that Barr lacks a D.C. jury pool that would be eager to impugn swamp creatures with the same zeal demonstrated for the prosecution of Roger Stone. This is a particularly tough pill to swallow for the sober masses who are watching our nation be systematically imperiled by Democrats and the media.

The recent I.G. report on FISA abuse was just another in a very long line of disappointing indicators that equal justice may never be restored to our nation. But just when you are ready to sell the house and move to mountains of Utah, William Barr makes bold public statements that stop the music like the scratch of a needle on an L.P. record. Is this guy Barr for real? Is he ready to face the hellfire that will be unleashed if he takes real steps to hold coup conspirators accountable? It’s looking increasingly likely that he is for real, but what remains to be seen how far he is willing to go. Both he and prosecutor John Durham made courageous statements in contrast to Horowitz’s predictable softball conclusions. At the same time, it feels as though we are getting our hopes up again. So where is this thing headed, and when will things start to happen?

The first question to be answered is exactly how far Barr needs to take it. If you ask MAGA country, they’re calling for heads up to and including Obama’s. This is doubtful and certainly not prudent because the political and systemic repercussions would be devastating and permanently destabilizing for the USA.

For a simple example, suppose that Barr approved prosecution all the way up to former attorney general Loretta Lynch. Based upon that precedent, what would stop a future attorney general from pursuing a political prosecution of the retired William Barr down the road? Care must be taken to avoid the precedent of high-level political war. Otherwise, we’ll morph into a banana republic in less than a generation.

Ultimately, justice needs to be done, so a compromise must be made. The most prudent course would be to prosecute up to a high enough level that sends a clear message to the subordinates of future leaders: follow corrupt orders at your own peril. This is likely the best way to disarm and deter the next corrupt administration without creating a constitutional crisis. The likes of Comey, McCabe, Rosenstein, Power, and so on understand this. There’s no doubt they are living in fear and uncertainty. Law-abiding Americans should take minor solace in the notion that they are suffering with fear right now as a result of their crimes.

The next question is timing. Suppose Comey gets indicted in spring 2020. CNN, MSNBC, and the rest of the corrupt mainstream media would start a 24-7 propaganda campaign that would look a lot like the Russia collusion narrative. However, this time, it would be louder and more desperate, and it would center on how a corrupt Donald Trump has weaponized the DOJ to go after his political enemies. The fact that Democrats and the MSM have already accused Trump of using the “awesome powers of government to punish political enemies” highlights an unmistakable Alinsky-esque pattern that has become prominent since 2016, which is — whatever you are guilty of, blame it on the other side.

This leftist tactic has become the signature calling card for the Democratic Party. After three-plus years of coordinated coup attacks from the “resistance,” imagine the nerve of accusing Trump of what they were doing all along.

The incessant hypocrisy demonstrated by the left and Democrats is staggering. Hypocrisy aside, the new media campaign would undoubtedly fire up calls for more articles of impeachment from the House — and not just for Trump, but for Barr as well. You can bet on the choreography of the outrage machine. And you can also bet that this campaign would not stop until election day 2020. Would such a media campaign do damage to Trump’s re-election bid? It is quite possible. Independent swing voters are a fickle and malleable bunch.

That makes the question of punishing the coup cabal before the election a serious political risk. If Trump asked Barr to hold indictments until after the election, would Barr do so in good conscience? What if Trump loses the election? Will anyone ever be held accountable? These difficult questions and many others must be weighed by Barr.

The anti-Barr rhetoric has already begun. He’s been referred to as Trump’s lapdog and is being accused of believing in “Trump’s conspiracy delusions.- What will the ruling class say if Barr brings down the hammer on any number of worthy lawbreakers? Heads will explode. The campaign to smear William Barr will be swift and epic.

We should never lose sight of the fact that one of the worst dangers America faces is the political corruption of the mainstream media. They provided the necessary cover for everything we’ve suffered through for the last three years. Barr alone will be no match for the smear machine and narrative-dictating elitist echo chamber. After all, today’s “resistance” is tomorrow’s CNN pundit.

Barr stands poised to be the most consequential attorney general in United States history. Unless you’ve been consuming a strict diet of leftist propaganda, you are aware that the Obama administration became the first administration to overtly undermine the peaceful transfer of power in our nation’s history. This treachery must be punished, or it absolutely will happen again. And next time we may not be so lucky as to have as strong a leader as we do. It could be argued that the left has been winning the battle for control by obfuscation of the truth. This is precisely why William Barr must take bold action.

All indications are that he understands the historic significance of his role. If he ultimately backs down, this experiment in self-governance is one step closer to being lost in trash heap of history. We should all pray for William Barr to find the wisdom and strength to do what is necessary to restore America’s faith in our system of justice.