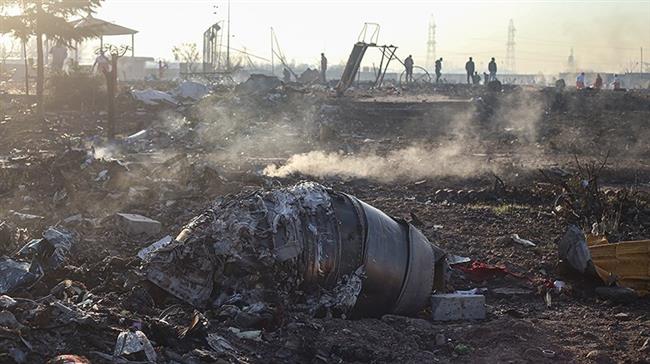 Iran’s top aviation official says the results of a probe into the crash of a Ukrainian passenger plane in Tehran will show what has happened, but Iran is certain no missile hit the aircraft.

The remarks were made by Ali Abedzadeh, the head of Iran’s Aviation Organization, during a press conference held in Tehran Friday after countries with a stake in crisis-hit Boeing claimed that the airliner had probably been brought down by a missile.

The Iranian official said no comment can be made about the cause of the plane crash, which killed all the 176 on board on Wednesday morning, and the reason will be determined after opening the black box.

“However, we can state it with certainty that no missile has hit this airplane. The plane was flying for over 1.5 minutes while it was on fire, and the crash site shows the pilot had decided to return [to the airport],” he noted.

Abedzadeh said the Islamic Republic can download the black box data under normal circumstances, but since the box has been damaged, it will be difficult to directly extract information from the system.

“We need special software and hardware which are available in our country, but if we fail to extract the data due to the damages of the black box, we will get help from other countries,” he noted.

At the same press conference, Hassan Rezaeifar, the head of the Aviation Organization’s commission for plane crash probes, said Ukraine, France, Canada, and Russia have all expressed their readiness to assist Iran with the data extraction.

Tehran, he said, will send the black box to one of these countries if it fails to retrieve the data.

Iran has already urged all parties involved, including Boeing, to contribute to the probe into the crash.

“According to international regulations, representatives from the civil aviation agency of the country where the crash has taken place, the civil aviation agency of the country which has issued the airworthiness certificate (Ukraine), the owner of the airliner (Ukraine International Airlines), the aircraft manufacturer (Boeing Co.), and the jet engine manufacturer (CFM International) can participate in the investigation process,” Iran’s Government spokesman Ali Rabiei said Friday.

“A delegate from Ukraine is already in Iran. We call upon Boeing Co. to dispatch its own representative to participate in the process of reading the black box data,” he said.

Rabiei said Iran also welcomes the participation of all the countries which have lost their nationals in the mishap.

The spokesman roundly dismissed the Pentagon’s allegations that missiles downed the Ukrainian jet. “No one will assume responsibility for such a big lie once it is known that the claim is fraudulent,” he said.

“It is unfortunate that the psychological operation of the US government, and those supporting it knowingly and unknowingly, are adding insult to the injury of the bereaved families and victimizing them for certain goals by propagating such fallacies,” he added.