Lunden Roberts, the mother of Hunter Biden’s baby, will get to grill Joe Biden’s scandal-ridden son under oath about his finances while he was on the board of an Ukrainian oil company, according to court papers obtained exclusively by DailyMail.com.

Biden, 49, is expected to bring all his financial records as Robert’s legal team plans to question him about his monthly earnings serving as a board member for Burisma. The two are currently engaged in a high-profile paternity case after Roberts, 28, filed suit against Biden in May, seeking child support for their 16-month-old child.

The deposition will take place a few days before Christmas, on December 23, at 9am in Little Rock, Arkansas, according to court documents filed on Wednesday.

On Monday, Roberts filed papers with 47 requests for admission by Biden, including asking him to admit he ‘or an entity owned, controlled or under your direction or supervision’ received money from a Chinese person or entity for foreign and domestic investment purposes.’

Joe Biden’s son Hunter Biden will be grilled by his baby mama Lunden Roberts under oath in a deposition on December 23, according to papers filed on Wednesday. The two are currently engaged in a high-profile paternity case after Roberts, 28, filed suit against Biden in May, seeking child support for their 16-month-old child

In the deposition that will take place in Little Rock, Arkansas, Biden will have to answer about his time employed as a board member for Burisma in the Ukraine.

The amount of money that Roberts is asking Biden to confirm is redacted in the seven-page document filed on Monday, but it has been widely reported that the vice president’s son was earning $83,000 a month for his role at the Ukrainian energy company.

The document contains 47 requests for admission by Biden, most of which are redacted in some way, including six related to his income taxes for the years from 2013 to 2018.

In other documents, obtained by DailyMail.com, Biden has objected to paying for his baby mama’s legal bill, which currently sits at $11,000.

The most recent filing comes after a judge demanded for both Biden and Roberts to hand over five years of financial records. Originally Judge Don McSpadden, who is presiding over the court in Batesville, Arkansas, had only asked for three years’ records. But last Tuesday said he needs five years of records before making a decision on how much the former vice-president’s son should pay to support his child.

McSpadden sent out a blunt letter to attorneys in the case — including the one that Biden fired minutes before a hearing last week.

He gave both Biden, 49, and Roberts, 28, just 10 days to come up with their financial details – meaning they should submit their records before Friday. Roberts will have to reveal how much she made in tips as a stripper at the Mpire Club in Washington, D.C., where the two met

Roberts who lives in Southside, Arkansas, had already submitted one set, but McSpadden wants more. 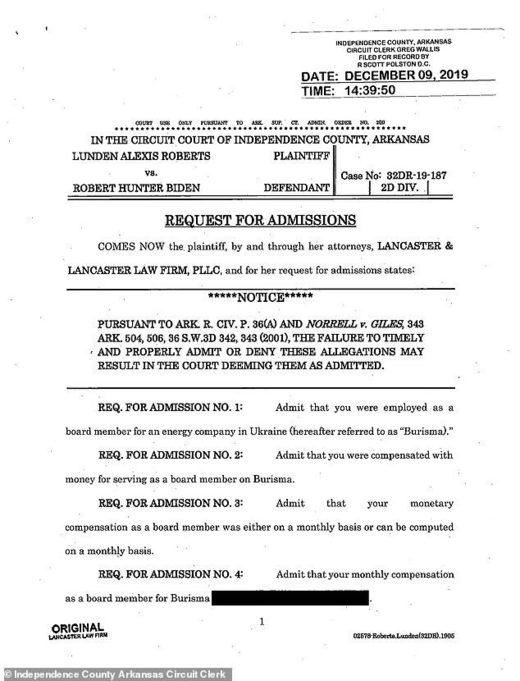 The amount of money that Roberts is asking Biden to confirm is redacted in the seven-page document filed on Monday, but it has been widely reported that the vice president’s son was earning $83,000 a month for his role at the Ukrainian energy company 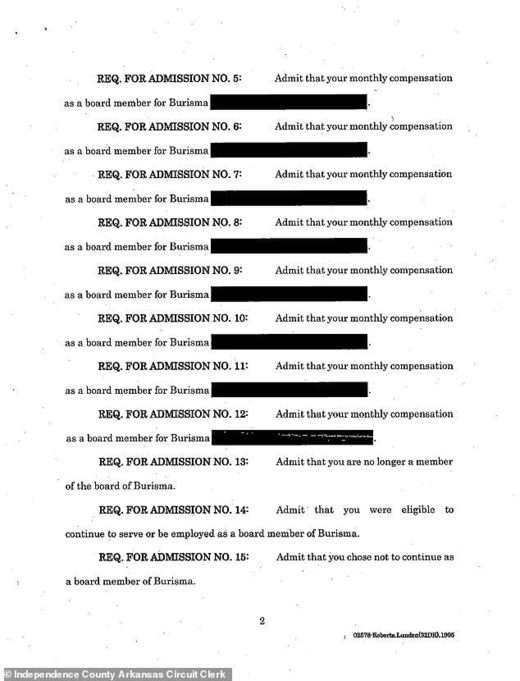 The document contains 47 requests for admission by Biden, most of which are redacted in some way, including six related to his income taxes for the years from 2013 to 2018

‘I have viewed Ms Roberts affidavit of financial means online and saw that she is employed at a family business probably for a salary of less than minimum wage,’ the judge wrote.

The court in Batesville, Arkansas, is expected to decide all matters in the case at the next hearing, expected for January 7, McSpadden told Roberts’s lawyer Clint Lancaster and former Arkansas attorney general Dustin McDaniel, who had been representing Biden.

The judge made it clear he wants the case over quickly. ‘I do not want to have this [drag] out nor do I want to have to drag out the monies these individuals may have received in any form or fashion.

‘I anticipate paternity as well as custody, support and visitation being established at our next hearing,’ he wrote.

He added: ‘I will do what I believe is in the best interest of the child.’ The sex of the child has not been released.

‘This matter has been filed in this court. Again, my major and main if not only concern is this child,’ McSpadden added. ‘Issues are no longer up to the parties.

‘I am going to treat this case like any other paternity case that comes before the court. Hopefully the parties will see fit to look out for the interest of this child.’

‘Therefore for now I want the affidavit of financial means and supporting documents to cover the last five years.

‘This would include monies received from any source for both parties whether it be support of any kind, gifts or salary, which would include bonuses, tips or gratuities.’

In a separate order, McSpadden said DNA tests have been accepted but he deferred a formal ruling that Biden is the father until the next hearing. He also told the lawyers to refer to the child by his or her initials in future filings.

The public is unlikely to see Biden’s records though as McSpadden has made it clear he will seal all the financial records. He filed a motion for a protective order citing fears that release of his financial information would be used ‘maliciously’ by the media.

‘The likelihood that [Biden’s] private records will be used in an inappropriate or malicious manner for reasons that have absolutely nothing to do with these proceedings is exceedingly high and should not be tolerated by the court,’ the filing read.

McSpadden said he was including McDaniel in the letter even though he realized he no longer represents Biden. He said he had no contact information for Biden and asked McDaniel to pass on the letter on to his former client. McDaniel said on Monday he was quitting due to an ‘irreconcilable conflict.’

Biden served on the board of the Ukrainian oil company Burisma from April 2014 to April 2019 — almost exactly the time that McSpadden wants the information.

He is said to have been paid as much as $50,000 a month, even though he had no experience in the energy industry.

His appointment to the board has been at the heart of the impeachment inquiry that House Democrats have launched into President Donald Trump as Trump is alleged to have pressed Ukrainian President Volodymyr Zelensky to find dirt on Biden in a bid to harm his father’s presidential ambitions.

ABC News asked Biden whether the $50,000 a month figure was accurate. But Biden answered: ‘Look, I’m a private citizen. One thing that I don’t have to do is sit here and open my kimono as it relates to how much money I made or make or did or didn’t.’

Hunter did not turn up for last week’s hearing in Batesville, although Roberts sat in the front row of the spectators’ gallery with her father, intently listening to the proceedings.

Biden was finally revealed to be the father of Roberts’ child following a DNA test — something Roberts had been urging him to take since May, following his repeated denials.

She is also asking the court to seal case records to protect the child’s identity for security reasons for both the baby and her family, citing presidential candidate Biden’s political status.

In previous filings, Roberts said her child was born in August last year. She referred to the infant as ‘Baby Doe’ and did not say whether it is a boy or girl.

Roberts’ legal team argues: ‘Baby Doe’s paternal grandfather, Joe Biden, is seeking the nomination of the Democratic Party for President of the United States of America. He is considered by some to be the person most likely to win his party’s nomination and challenge President Trump on the ballot in 2020.

‘The members of the Biden family either are protected or eligible to be protected by the United States Secret Service as a direct result of Joe Biden’s political status.

‘Baby Doe’s paternity could put the child and those close to the child at risk of harm for the same reasons the Biden family is protected by the United States Secret Service.’

Roberts filed a petition for paternity and support in May, saying Biden was the biological father of her baby, asking the court to establish paternity while seeking child support, health insurance and legal fees.

Biden had previously denied all allegations and demanded the suit be tossed.