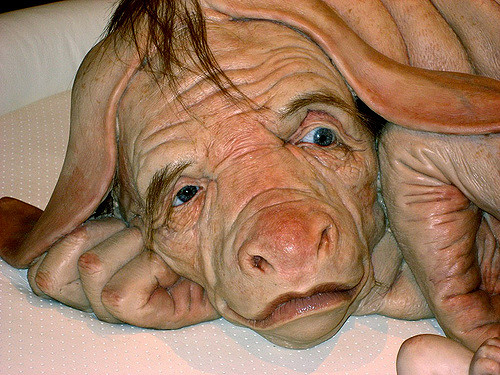 The Japanese government has granted its approval for The University of Tokyo to proceed with a controversial stem-cell research project that aims to develop human-animal “Frankenstein” hybrid creatures, which mad scientists at the school plan to manufacture in labs from embryo to “life.”

Led by renowned geneticist Dr. Hiromitsu Nakauchi, the work will involve growing human cells in rat and mouse embryos, which will then be brought to term in surrogate animals. Their stated goal is to eventually be able to grow functioning vital organs fit for surgical implantation into transplant patients – but is there more to the story than that?

Critics of the endeavor say that those involved with it are attempting to “play God,” or at least trying to, by reconstructing animal lifeforms in the same way that genetic scientists are reinventing plants through genetic engineering. There’s really nothing good that can come from this, many of them contend, especially when it comes to the very real potential for uncontrollable genetic drift.

Should the implanted human cells stray beyond the targeted organs into other areas of the test animals’ bodies, warns Colin Drury writing for The Independent, the end result could be literal half-animal, half-human monsters being unleashed into the population. This is why such experimentation has long been forbidden – until now, that is.

In Japan, prior to the government giving these scientists the green light, growing human cells in animal hosts was forbidden beyond 14 days. But that’s all changed, as scientists are now free to bring these mutant lifeforms to term – all in the name of “progress,” of course.

“We don’t expect to create human organs immediately, but this allows us to advance our research based upon the know-how we have gained up to this point,” Dr. Nakauchi is quoted as saying to the Japanese newspaper Asahi Shimbun.

In the immediate term, Dr. Nakauchi and his team aren’t planning to actually bring any of their hybrid embryos to term. They’re instead planning to take a slow approach, beginning with a 14.5-day growth period and moving to a 15.5-day period after that, followed by even longer growing periods as deemed necessary.

“It is good to proceed with caution,” says Tetsuya Ishii, a science-policy researcher at Hokkaido University in Sapporo, as quoted by The Independent. “It will make it possible to have a dialogue with the public, which is feeling anxious and has concerns.”

For more related news, be sure to check out GMO.news.

Why do secular scientists have this seeming obsession with corrupting the gene pool and assuming the role of gods in trying to recreate the planet?

As we reported back in 2011, however, animal-human hybrids aren’t technically new, seeing as how they received government approval, at least in the United Kingdom, as far back as 2008.

The 2008 Human Fertilisation Embryology Act essentially legalized the creation of animal-human hybrids throughout England, some 150 of which had already been developed in the U.K. by the year 2011. How many have been created since is anyone’s guess, but the point is that a Pandora’s box has now been opened, and it’s unlikely to close any time soon.

“Among the monstrosities they created were animal eggs fertilized with human sperm, and cybrids – animal cells that are injected with human cell nuclei,” wrote Mike Adams, the Health Ranger, in response to this news at that time. “They also created chimeras, a mixture of human cells and animal cells, much like what happened in the sci-fi Planet of the Apes depiction of science gone wrong.”

“Many people don’t know it, but even today, entire rooms full of primates in cages are used to grow viral material that’s harvested from their organs and blended with toxic chemicals to make vaccines,” Adams went on to warn.

Sources for this article include: