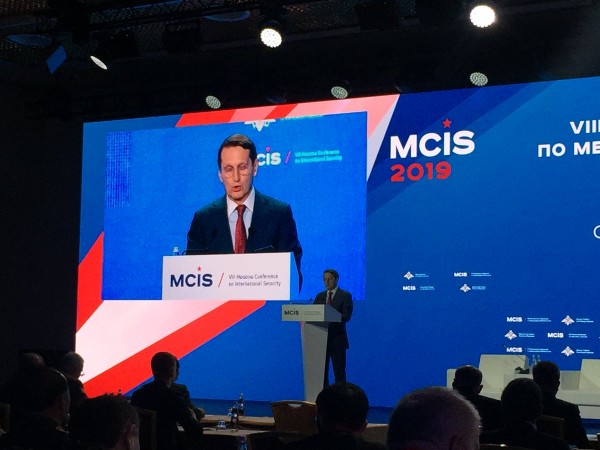 An annual Moscow Conference on International Security took place on April 23 – 25. With 100 states participating that constitutes the majority of the UN members.

Considering that the US and British intelligence gets their intel from the Media, it’s almost cruel to keep them in the dark.

If one day you wake up and find yourself outside of the global order, question the RT.

Dear participants of the Conference!

Our meeting is taking place against a backdrop of an extremely complex international situation. It is qualitatively different from previous periods of the “cold war” and the brief triumph of American unipolarity. The confrontation between the powers in those years was tense, but generally predictable and regulated by a clear set of rules. In today’s world, the degree of disorder and uncertainty is growing rapidly. Old balances of power are collapsing, norms are being rewritten, and rules are being destroyed in all spheres of inter-state cooperation.

The main reason for the observed processes lies in the unwillingness of the so-called West led by the United States to recognize irreversibility of formation of multipolar world. Clearly visible is a desire of the Euro-Atlantic elite to maintain its leadership, which until recently seemed uncontested. German philosopher Walter Schubart at the beginning of 20th century said about the British that they, unlike other nations, look at the world as a factory, and do not crave anything but profit and benefits. Since the collapse of the Soviet Union, we have had an opportunity to observe how historical and political successors of the British – the Americans – have built and expanded their factory, or rather the corporation, which now squeezes profits on a global scale. Many countries, such as Yugoslavia, Afghanistan or Iraq, have experienced its business model.

But, at the beginning of the new century, something went wrong for the Atlanticists. States and peoples began to remind Washington about their geopolitical sovereign subjectivity in more and more stern terms. The global financial cataclysm of 2008 revealed a shaky foundations of the global liberal economy built by the West. To date, no new sources of high and stable growth have been discovered. In the Western countries themselves, the population was not prepared for the severe consequences of the crisis, nor for the experiments of its own elite in the field of multiculturalism and the substitution for traditional identity. Proof of this – a sharp rise in popularity of anti-systemic, nationalist and populist forces. A society sends clear messages to the authorities that it feels deceived. But, instead of an adequate response, their elites chant about a mythical “foreign interference” and organize “witch hunts”.

Many of the above-mentioned problems would lose their relevance if the Western elite would learn to consider international relations not as a “zero-sum game”, but as a way to jointly solve accumulated problems. However, the global corporation cannot stop expanding and allow its profits to decline. It is more likely to destroy the international legal system and security architecture, which has become disadvantageous and inconvenient for them.

Motivated by selfish motives, Americans and their obedient allies are increasingly resorting to use of force to advance their interests at the expense of multilateral negotiations. They are making outright attempts to destabilize the situation in most regions of the world. And increasingly, they act not only without regard to the norms of international law, but also against common sense.

A striking example is the situation around Venezuela, which today is being cynically decimated in the same way as previously Libya or Syria. The White House itself is talking about danger of uncontrolled migration, plans to spend billions on strengthening the border with Mexico, and at the same time inflates a new civil conflict, provokes another humanitarian disaster, and this time – almost at its doorstep. Such arrogance and self-deception are some of the main challenges to international security.

This reckless line of action is not limited to Venezuela, which the United States, judging by its behavior, considers to be almost its own province! We see the United States, the United Kingdom and its most loyal NATO allies gradually abandoning basic rules and multilateral regimes, even on issues as critical to strategic stability as arms control and WMD. They violate principles of free trade, which is fundamental for the global financial and economic system they themselves have built. They arbitrarily interpret international law, inflicting military strikes on the territory of sovereign states, killing tens and hundreds of thousands of civilians and imposing sanctions against their geopolitical rivals. Even the very concept of law was turned into a joke after the British introduced a “Highly Likely” expression into legal circulation. Other Western countries considered it sufficient for a mass expulsion of Russian diplomats (which received a mirror response).

The US decision to recognize Jerusalem as the capital of Israel and the Golan heights as the territory of the Jewish state in spite of UN resolutions, as well as Washington’s unilateral withdrawal from the agreement on the Iranian nuclear program undermine collective efforts to stabilize the situation in the Middle East. Moreover, the very principle of crisis management through multilateral negotiations is under threat. The emphasis on the use of force without regard to the principles of sovereignty, territorial integrity and non-interference in the affairs of other states is a basic element of the doctrinal documents of Trump’s administration, including its national security Strategy and the US Counter-Terrorism strategy.

Against this background, many regional powers are also beginning to behave more aggressively, counting, for example, on the solution of long-standing border disputes or strengthening their own military and political positions. As a result, there is a chain reaction, and collective response mechanisms erode further. Impulsiveness replaces decision-making, and an egoistic approach prevail. The risk of so-called accidental conflicts is rising due to unilateral and spontaneous actions of individual players and they are difficult to calculate. An increasing number of people around the world are being getting caught up in conflicts of varying intensity. As a result, even a small provocation may be enough to trigger a global crisis.

Remember the First World War. None of the great powers, it is believed, were ready to start it, and yet they all literally “fell” into it, paying for it with tens of millions of lives, and some – with disappearance of the geopolitical map of the world. A hundred years ago, the state leaders in the justification for their actions could refer to the lack of international legal mechanisms for the settlement of contradictions at early stages. Today, such tools exist, but the so-called West, and especially the United States, consistently destroys it without offering anything in its place, but harassment of white knuckle Bullies or empty declarations about strengthening their supposedly universal liberal order, reality of which is doubted even by its authors.

This irresponsibility can, probably, be explained by the fact that the United States don’t have the historical trauma of war that other nations, especially Russia and the European countries, have. But the modern world (by the way, by the efforts of the US itself) has become so interdependent, small and flat that even the Atlantic and Pacific oceans can no longer be considered a reliable protection during a possible global conflict.

Russia, which has experienced three devastating wars in the past hundred years, never tires of calling on other members of the international community to jointly search for solutions to accumulated problems. Unfortunately, even in areas where such negotiations are conducted, such as fight against terrorism or information security, Western partners continue to keep a middle finger in their pocket. This does not mean, of course, that we need to cut off all contacts, to go into self-isolation or to isolate them. A dialog must continue, if only to prevent the final collapse of existing international system, which nevertheless provides strategic stability. In the current tense situation, it is necessary to follow the path not destruction, but strengthening global and regional formats, simultaneously improving and transforming them in the interests of peace and security throughout the world.

If the West, led by the US, lacks maturity and courage to move in that specified direction, the rest of power centers will have to design a global future without the West. A new world order, just and sustainable, must replace an obsolete liberal universalism. It must be established on the conditions and in the forms that will ensure joint existence of states and regional unions, while preserving the right to original development for each of them. I am sure that the common sense forces in Western countries are aware of risks facing the world community and are elementary interested in self-preservation will be increasingly drawn to this process.

The contours of the future world system are still shrouded in fog of uncertainty. Whether it will ensure true unity in diversity or will, once again, become a cover for the power of a narrow club of a few chosen, largely depends on our work together. The Moscow conference is an excellent platform for such work, for deepening cooperation in the field of global and regional security.

Thank you for your attention!