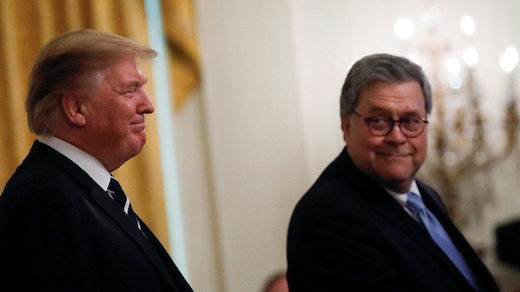 US President Donald Trump has allowed his attorney general to declassify information about what prompted the Russiagate investigation – and ordered the heads of the intelligence agencies to cooperate with the reveal.

Attorney General William Barr has been allowed to begin declassifying information related to the counterintelligence investigation into Russia’s alleged interference in the 2016 election as he reviews the circumstances that led the FBI to open the probe. The order also directs the “intelligence community” to “quickly and fully cooperate,” providing whatever materials Barr requests.

Trump announced the declassification on Twitter, promising that it would “ensure that all Americans learn the truth” about the probe that has cast a shadow over the first two years of his presidency and “restore confidence in our public institutions.”

By giving Barr the authority to declassify documents, Trump is going over the heads of the intelligence agency chiefs, many of whom have made no secret of their disagreements with the president. Barr began his investigation last month, focusing on the FBI’s use of confidential informants as well as its grounds for using FISA to surveil the Trump campaign.

Last week, Trump tweeted that his campaign had been “conclusively” spied upon, and called for “long jail sentences” for those responsible for this “treason,” but did not elaborate further.

Barr has said he believes “spying did occur” on the Trump campaign, though former agency director James Comey has complained “the FBI doesn’t spy, the FBI investigates.” Even current FBI director Christopher Wray seems to be uncomfortable with “spying,” telling a Senate panel it is “not the term I would use” – he prefers “surveillance activity.”

Trump has repeatedly and vociferously denounced the Russiagate investigation as a “witch hunt.” The nearly-three-year-long investigation – beginning with the FBI surveillance in 2016 and ending with special counsel Robert Mueller’s submission of his report in April this year – failed to turn up conclusive evidence of wrongdoing by the president, though that hasn’t stopped his political opponents from calling for his impeachment anyway.