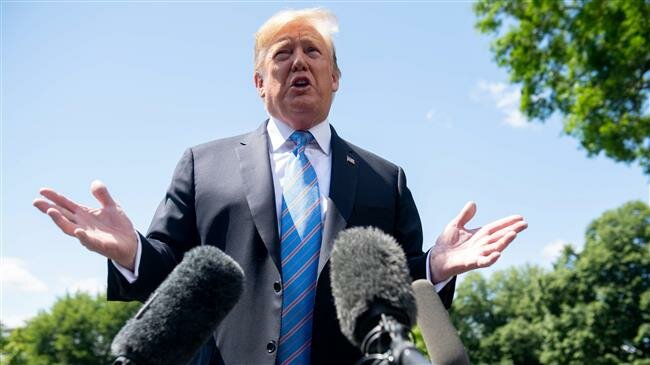 US President Donald Trump has rejected a New York Times report that American officials are preparing a military plan to deploy up to 120,000 troops to the Middle East to counter any threat by Iran.

“I think it’s fake news, OK? Now, would I do that? Absolutely. But we have not planned for that. Hopefully we’re not going to have to plan for that. And if we did that, we’d send a hell of a lot more troops than that,” Trump told reporters at the White House on Tuesday.

The New York Times reported on Monday that Acting Defense Secretary Patrick Shanahan put forward — a plan— which he had updated on National Security Advisor John Bolton’s orders — last week in a meeting of top national security officials that envisions deploying some 120,000 American troops to the Middle East region “should Iran attack American forces or accelerate work on nuclear weapons.”

The officials said that during the meeting, Shanahan gave an overview of the Pentagon’s planning and then turned to US Chairman of the Joint Chiefs of Staff General Dunford to detail various force options.

“The uppermost option called for deploying 120,000 troops, which would take weeks or months to complete,” the report said.

The number of the US troops planned for the deployment “would approach the size of the American force that invaded Iraq in 2003,” the report added.

Among those attending the meeting were Bolton, CIA Director Gina Haspel and Director of National Intelligence Dan Coats in addition to Dunford and Shanahan, the report noted.

On Tuesday, Iran’s Ambassador to the United Nations Majid Takht-e Ravanchi on Tuesday dismissed as “psychological warfare” a reported US military plan aimed at Iran, under which Washington could deploy tens of thousands of troops to the Middle East.

Commenting on this, American writer and political analyst Daniel Patrick Welch said he agrees with the Iranians who believe that the US is just attempting to scare Iran back to the table.

He stated that the Pentagon hates Bolton and Secretary of State Mike Pompeo’s cowboy approach.

“No way they would allow a huge influx of troops in the Middle East,” he told Press TV on Tuesday.

The analyst added, however, “they have no shortage of evil motives… and they have all played a part at some point in history.”

“Don’t get me wrong,” he continued, “there are no doves in the US political establishment when it comes to Iran, or any other country for that matter. War seems like good business and unquestioned policy for those on both sides of the aisle. But these are the real wackjobs. I mean, even Trump is getting sick of Bolton.”