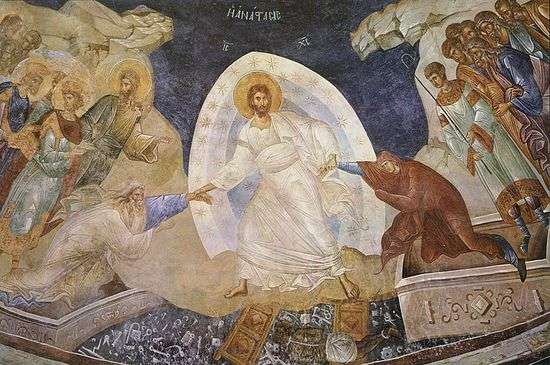 Jesus is standing on the broken doors of hell. The massive portals lie crossed under his feet, a reminder of the Cross that won this triumph. He stands braced and striding, like a superhero, using his mighty outstretched arms to lift a great weight. That weight is Adam and Eve themselves, our father and mother in the fallen flesh. Jesus grasps Adam’s wrist with his right hand and Eve’s with his left, as he pulls them forcibly up, out of the carved marble boxes that are their graves. Eve is shocked and appears almost to recoil in shame, long gray hair streaming. Adam gazes at Christ with a look of stunned awe, face lined with weary age, his long tangled beard awry. Their limp hands lie in Jesus’ powerful grip as he hauls them up into the light.

Behind Christ, King David, King Solomon, the prophet Isaiah, and the prophet Jeremiah stand in gorgeous robes, clustered tightly like a standing-room-only crowd to see this marvelous event. There is an air of joy, even conviviality, among them. St. John the Baptist is in the throng, still clothed in camel skin, now in full repossession of his head. Behind them are ranks and ranks of the righteous dead who are dead no more, for Christ has set them free.

Beneath Christ’s feet, there is a black receding pit with floating silver shards of metal, chains, locks, and ominous instruments of pain. These instruments are broken and shattered, and the locks are unhinged, except for one set, still intact and in use. These locks bind the body of that vicious old Satan, who grimaces in his captivity, bound hand and foot and cast into his own darkness.

When you think of images of the Resurrection, what do you think of? Probably not this traditional image used in the Eastern Orthodox Church. In the West, our first image is usually a graceful one: women who had been trudging toward the tomb on a misty Sunday dawn stand stock-still in astonishment. An angel is sitting on a round stone with one hand raised in the air.

The image conveys a sense of silence and the stillness of caught breath as the moment on which the whole world turns is revealed. Colors are muted. The dew wets the hem of the women’s dresses, and, for a moment, all is still. This garden-tomb image answers the question at the end of the three days, “Who rolled away the stone?” But there is another question, “Where did he go?”

“Did you not know that I must be about my Father’s business?” Jesus might ask us once again. In Orthodoxy, we believe that the central meaning of the Resurrection is victory. Thus our traditional image is more vibrant and noisy, and it rings with a victorious shout. The Resurrection is a victory over sin, death, and the devil, and a victory over the dark forces that enslave us, despise us, and wish to destroy us. Thus we cry hundreds of times between Pascha (Easter) and Pentecost, “Christ is risen from the dead, trampling down death by death, and upon those in the tomb bestowing life!”

For long millennia, the righteous were trapped in the lair of Satan. “And all these, though well attested by their faith, did not receive what was promised, since God had foreseen something better for us, that apart from us they should not be made perfect” (Heb. 11:39-40). Even those who were not righteous heard the ringing voice of Christ in the grave: “For Christ also died for sins once for all, the righteous for the unrighteous, that he might bring us to God, being put to death in the flesh but made alive in the spirit, in which he went and preached to the spirits in prison, who formerly did not obey, when God’s patience waited in the days of Noah” (I Peter 3:18-20). It was to the spirits in prison that Jesus went and defeated that cruel jailer and set them free.

When we turn to the biblical story of the Resurrection we find that, in Matthew at least, it’s not as silent as our imaginations suggest. As the women arrive at the tomb there is “a great earthquake” caused by the descent of an angel. “His appearance was like lightning,” an image that succeeds in astonishing because we cannot visualize what it means. He is dressed in robes white as snow, whiter than any fabric could be in that era.

The angel rolls away the stone and, in a closing gesture of command, sits upon it. That settles that. The terror-stricken guards, whose training had not covered this situation, are so frozen with fear that they “became as dead men.” The women are not much less terrified, but they listen as the angel tells them not to be afraid. He gives them instructions: Go tell the disciples to meet Jesus in Galilee.

As they depart, “with fear and great joy,” they meet the Lord himself, fresh from his triumph over

Death. As the women fall at his feet, he repeats the angel’s message: “Go and tell my brethren to go to Galilee.”

This version of the story differs from that in the Gospel of Mark, and that perplexing version is even more intriguing. As Mark has it, the women go to anoint Jesus’ body, but instead find in the tomb “a young man sitting on the right side, dressed in a long white robe.” He tells them that Jesus is risen and instructs them to tell the disciples, as above. But here we are told that they are terrified and flee the tomb. “And said nothing to anyone, for they were afraid.” The earliest versions of this, the earliest Gospel, end abruptly at this point.

It’s an odd gap between that small vignette of fear and retreat, and all that came next: the Apostles’ relentless courage unto death, not ascribable to mere fond memories of a really nice dead guy; the preaching of the gospel across the Mediterranean bowl, the persecutions and martyrdom, the establishment and rise of the church, and finally, the disintegration of Christendom in these times, perhaps a prelude to full-circle persecution and martyrdom.

But at one mesmerizing moment, the news of Christ’s resurrection was held by a handful of women who were too scared to tell anyone. But tell they did, and the story went on unreeling, till half a world away and two thousand years later it rings out with loud joy. Hundreds of times in the season of Pascha we will sing: “Christ is risen from the dead, trampling down death by death, and upon those in the tombs bestowing life!”