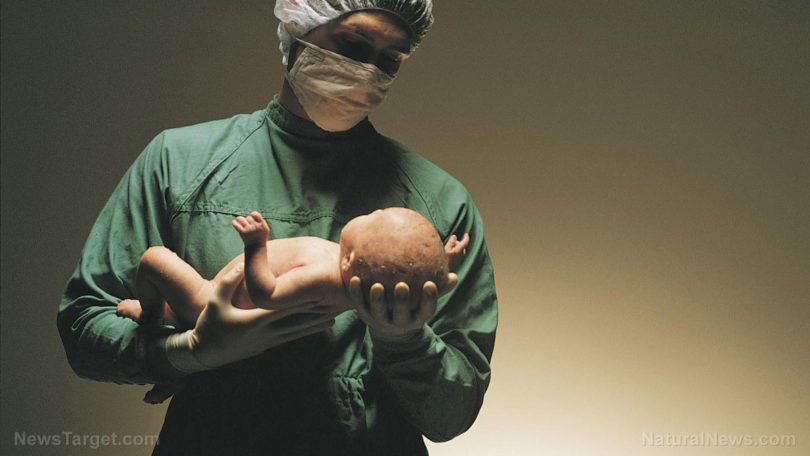 If you wonder where “progressivism” is headed, look no further than the self-mutilation movement where LGBT followers physically maim their own bodies to become so-called “nullos” by cutting off their nipples and reproductive organs. The next escalation in this war on biology will, I predict, involve parents maiming their newborn infants by slicing off their penis and scrotum shortly after birth in order to “rid” the child of gender inequality.

This physical maiming of newborn infants will be embraced by the Democrats and Leftists as a “progressive” way to achieve “gender equality.” Note that this is far beyond the Female Genital Mutilation currently embraced by Leftists, which involves the painful and permanent maiming of a female infant. FGM is widely practiced in the Somali community in places like Minnesota, which produced the  America-hating congresswoman Ilhan Omar, an anti-semitic radical Muslim for whom mutilating young girls is just considered “part of the culture.”

The LGBT community already absurdly claims that children are born “genderless” and then “assigned” a gender by the doctor. This dangerous, delusional thinking will justify parents grabbing scalpels and physically maiming their newborn children in order to achieve a “correction” for their genderless status by violently removing all organs and tissues that are not gender-neutral. Yes, it’s completely insane and criminal, but this is exactly the way the lunatic Left now thinks. (See mini-documentary video below for more coverage.)

Will any doctor stand up against the left-wing obedience cult that violently assaults and murders infants?

My question is: Will any institution in society stand up against the increasingly deranged, child-killing and child-mutilating “progressivism” that’s now being pushed everywhere? Are there any doctors in America who will denounce parents maiming their own children in the pursuit of gender equality? Somehow, doctors are more than willing to call the police on parents who refuse to have their children subjected to toxic chemotherapy, but there’s little question those same doctors will stand by and say nothing while parents commit felony assault against their own children with a scalpel and an ice pack… all in the name of “progressivism.”

The Left in America today has become a dangerous obedience cult that’s obsessed with death and self-mutilation. Until they are stopped, their agenda will continue to become more twisted, insane and psychopathic. This is the same movement that has pushed for the legalization of infanticide across America, with laws passed in New York, Vermont and other states that literally allow parents to murder healthy children after they are born, all in the name of “women’s health.”

The twisted, almost demonic justification for all this is that, according to Leftists, infants are not humans until you decide to keep them, and it is this underlying deception that will endorse parents physically maiming their own babies, leaving them emotionally and physically scarred for life, all in the name of pursuing the delusion of “gender equality.”

This is, of course, extreme child abuse. It is “child mutilation,” but because the mutilation is pursued in the name of gender “equality,” it will be embraced, endorsed and even celebrated by the Left, which is now characterized by mass mental illness.

As I’ve said before in this article on the climate change psychological terrorism now being pushed by the Left:

The future of liberalism isn’t a boot stamping on your head forever; it’s actually a screaming, bloodied, scarred baby that has been violently attacked and had its penis sliced off by “progressive” parents while obedient doctors watch and cheer in order to support political correctness and keep their jobs in hospitals that maim babies for profit while billing the federal government for “gender-restorative procedures” which are nothing more than horrific crimes committed against human babies that somehow survived the Left’s post-birth abortion procedures.

According to the Left, if you stab a newborn just a few times in the right places, it’s called “progressivism.” If you keep stabbing and murder the baby, it’s called “women’s health” (i.e. abortion).

You can’t make this up. You can’t even dream this up in a nightmare. Liberalism is beyond any nightmare the world has ever witnessed in human history. The Left Cult is a death cult, and they can’t wait to kill themselves and as many other people as possible as they take down humanity in the name of “environmental justice.”