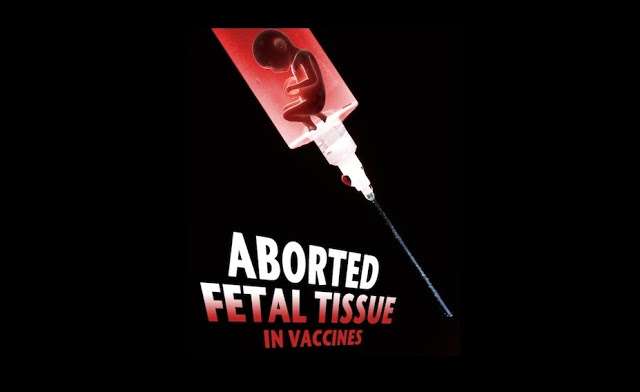 Aborted fetal tissue, believe it or not, is another one of the horrendous ingredients found in the vaccines of modern Western Medicine and its drug-pushing chemical arm, Big Pharma.

I say “modern” Western Medicine yet it is difficult in this case to see how Allopathy lives up to that, given that it engages in a practice of inserting the body tissue of dead babies into the bloodstreams of patients, most of whom have no idea they are being subjected to it.

Given the long list of dubious, harmful or outright cancerous adjuvants already used in vaccines, the inclusion of aborted fetal tissue is another reason, an ethical one in addition to all the health ones, why vaccines need to be avoided at all costs.
Aborted Fetal Tissue Called “Human Diploid Cells” on Vaccine Packaging

Big Pharma isn’t going to just come right out and admit it uses dead baby DNA. That would be a disastrous marketing choice. Instead, another Orwellian and euphemistic phrase is adopted: “human diploid cells“.

As I wrote in a previous article “Toxic Vaccine Adjuvants: The Top 10“, these human cells are fetal cells taken from the tissue of babies or fetuses, some of which are definitely aborted! This has being going on for over 50 years.

The article Human Fetal Links with Some Vaccines admits that:

“Two different strains of human diploid cell cultures made from fetuses have been used extensively for vaccine production for decades. One was developed in the United States in 1961 (called WI-38) and the other in the United Kingdom in 1966 (called MRC-5).”

The Connection Between Aborted Fetal Tissue and Autism

Strong and copious evidence is coming to the surface that vaccines are responsible for the rising tide of autism in America (and globally); even judges in Italy have ruled so in their law courts.

Dr. Deisher of Sound Choice has studied the subject considerably, and released a studywhich found a connection between the injection of human diploid cells / aborted fetal tissue and autism.

The connection is that when you inject something foreign into your body, your cells will either assimilate it (whereby the foreign human DNA will be transported into nuclei and be integrated into host genome, causing phenotype change) or attack it (meaning you develop an auto-immune response, leading to the auto-immune diseases of the ASD [Autism Spectrum Disorder]).

Either way, residual human DNA fragments (aborted fetal tissue) in vaccines can be one of causes of autism.

“Autism and other childhood neurodevelopmental diseases such as childhood onset schizophrenia, childhood bipolar disorder and intellectual disability have been associated with hundreds of de novo (new) mutations, most likely caused by the presence of these fragments of fetal DNA and retrovirus in our children’s vaccines.”

The idea of the human body attacking itself due to autoimmunity is also mentioned in a recent article by S. D. Wells of NaturalNews.com, where she talks about recombinant human albumin.

Recombinant means it is has been genetically engineered, i.e. the cells of a host organism have been spliced with other genes.

Wells discusses how cows contract mad cow disease: by eating other cows, after which their central nervous system gets compromised. The situation is very analogous to when your blood, via a toxic vaccine, is fed some human albumin (i.e. aborted fetal tissue).

The human version of this disease, known as variant Creutzfeldt-Jakob disease (vCJD), is thought to be contracted by consuming beef products that contain parts of an affected animal’s nervous system, such as the spinal cord and brain.” Did you pick up on the word bovine there?

“In many cases, the early symptoms of mad cow disease mimic other, more common ailments, making diagnosis difficult. In fact, according to web resources, it is only in the latter stages of the disease that diagnostic testing can accurately pinpoint the abnormalities which positively identify the disease.”

Sounds familiar, maybe like ASD — autism spectrum disorder — with some ADHD mixed in, some nervous twitches and chronic care for life.

It doesn’t stop at vaccines, however. As it turns out, aborted fetal tissue is also found in Big Pharma drugs and cosmetics, all approved by the FDA.

If that is the case, why is aborted fetal DNA even being used at all?

Is Aborted Fetal Tissue in Vaccines Akin to Cannibalism?

Some may scoff at this question and regard it as absurd, but think about it: isn’t the definition of cannibalism the intake of the flesh, blood or some body part of your own species?

How much of a difference is there between eating human tissue or allowing it to be injected straight into your bloodstream?

Of course, there are medical emergencies where people need blood or organ transplants and adopt another person’s blood or tissue to survive, but vaccines do not fall into this category.

One entry at Dictionary.com defines cannibalism as “the ceremonial eating of human flesh or parts of the human body for magical or religious purposes, as to acquire the power or skill of a person recently killed” – which is an interesting definition, given the Satanic, black magic background of the New World Order families.

[In the following video, you can listen to top Zionist Rabbi Abe Finkelstein’s live intervention during a radio show, where he candidly explains the sick agenda of the world’s “elite”. It includes:

– kidnapping children (by the way, the number of children that go missing every year worldwide is almost impossible to imagine),
– sacrificing them in Satanic rituals dedicated to the Anunnaki,
– blood drinking,
– cannibalism,
– brainwashing & mind control “educational” system,
– fake entertainment industry,
– turning us all into a slave population.

As always, the so called “elite” are telling us their agenda straight to our faces, because they consider us too stupid and powerless to act against them in any significant way.]

Western Medicine is essentially a Rockefeller creation and the Rockefellers are key players, no doubt, in the dark rituals that go on at Bohemian Grove and other sites of the Secret Societies.

When you go beyond the medical cover story that it is needed to make an effective vaccine, is the inclusion of aborted fetal tissue in vaccines really an attempt to get the population accustomed to eating its own?

Is it just a coincidence that cannibalism has been a beloved practice of the ruling bloodline families for hundreds (if not thousands) of years?

Is this really a result of dark forces (i.e. the Archons) trying to form the world in their image and trying to entrain the world into their frequency – one of domination, destruction and death, where might is right and it is acceptable for the strong to exploit the weak, and literally eat them?

It is truly astonishing to think that the use of aborted fetal tissue is a standard practice in Western Medicine; but it’s better to face the truth than live in denial about it.