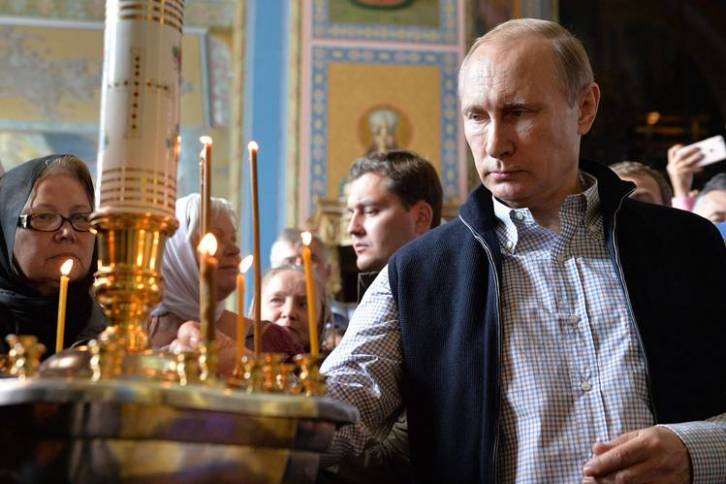 “Normally he goes to obscure, rural churches to spend the holidays, wishing to avoid the cameras and distractions of the major cities.”

Vladimir Putin is fairly mute about his own religious views. Being a member of the Communist Party is no evidence of atheism. Its evidence only of conformity. Party membership was essential for having any a career of any substantial kind, especially in the security services.
Military and police careers were, as in all societies, attractive to patriots and nationalists, though it had to be a “Soviet” rather than a specifically Russian nationalism. However, he does say that he was secretly baptized by his mother at 18 months in Petersburg at the Cathedral of the Martyrs Alexandria and Antonia of Rome. From this, it is safe to say that Putin was secretly taught the faith from a young age

According to his mother, it was the day of St. Michael and all the Angels, so it had to be November 21st. Putin’s views are, in hos own words, to be internal, and never the subject of a show. The cross that his mother gave him at the Sepulcher Church in Jerusalem he wears always. In his house many years ago, a fire broke out from the heating unit of the sauna malfunctioning. Worried that the cross, which he had left near his bed, was gone forever, once of the workmen found it perfectly intact in the midst of all the rubble.

Putin stated on Larry King that he sees this event as a miracle and a “revelation.” His personal commitment to Orthodoxy never wavered afterwards. Normally he goes to obscure, rural churches to spend the holidays, wishing to avoid the cameras and distractions of the major cities. His natural constituency is the Orthodox population, who, as polls have stated since the mid 1990s, trust the patriarch more than anyone else in Russia, even more than Putin himself.

Unlike Slobodan Milosevic, Putin is clearly comfortable and at home in an Orthodox setting, and his ritual movements are smooth and comfortable, not jerky and artificial as might be expected for a hypocritical display. Milosevic was noted for his awkwardness in Orthodox churches in the 1990s, suggesting he had no experience in them. The only time he seemed slightly stiff is when, upon kissing an icon, the background noise was of hundreds of cameras taking pictures.

This is one of the videos in which Putin reveals the origin of his faith.

It shows us the following:

Putin first speaks about his Baptism: 02:00

He believes in the traditional Russian family: 04:03

The Orthodox bikers in the new Russia: 10:52

Putin’s acknowledges the saints and martyrs murdered by the communists: 11:45

Putin is far superior for the church than Peter the Great and many others. Non-Orthodox monarchs in Russia history include Peter I, who was a materialist Freemason. His successor, the mockery “Catherine I,” who was a former prostitute from Germany taken as war booty by Peter. She was placed on the throne in mockery, similar to the French Revolutionaries placing a prostitute on the throne of the Bishop of Paris during the terror. Lord Biron, a Freemason who ruled while the two “Empress Annas” tried on outfits), Peter III who was a Lutheran, soon murdered by, Catherine II, a Deist and vehemently anti-Orthodox and anti-Russian. Alexander I dabbled in the occult, while Alexander II was generally secular. At the same time, these and other monarchs placed atheists and masons as head of the synod on a regular basis. Putin is far more Orthodox than those monarchs.

Putin’s concern with ecumenism with Rome is puzzling. His constituency is Orthodox and nationalist. He has only to lose with this policy. Yet, no one else on earth right now has done more to strengthen and spread Orthodox than Putin and the Moscow Patriarchate. On February 13, 2012, Putin condemned the Red Army in the Russian Civil War. In 2012, 65,000 gathered at the Cathedral of Christ the Savior in Moscow to defend the church against Pussy Riot and other attacks on it. This is the new Russia.

Back in 2001, Izvestia interviewed Putin’s spiritual father, the Archimandrite Tikhon (Shevkunov) of the Sretensky Monastery. This was December of 2001, probably prior to anyone really knowing too much about his policy agenda. The Archimandrite stated:

Putin is really an Orthodox Christian really, and not nominally. He confesses, receives communion and is aware of his responsibility before God for the ministry entrusted to him from on high and for his immortal soul.

The burden and severity of the problems he is undertaking to solve and his responsibility for these is truly enormous. Anyone who really loves Russia and wishes her well can only pray for Vladimir whom the Providence of God sent to deliver Russia.

The Archimandrite was himself sent to prison by the old KGB and had members of his family perish because of them. Thus, Putin’s background in this organization did not initially endear him to the President. However, he soon was convinced of Putin’s Orthodox mind. In his book, the Archimandrite writes:

Combining the modern Russian state with past forms, Putin has undertaken a huge effort to connect it to the heavens. The construction of churches, the reconstruction of destroyed parishes, monasteries and the revival of Russian shrines has become an urgent matter for Putin.

For the dark, soulless landscape that was imposed on Russia after 1991 – one dominated by nihilism, anger, and nonsense mercantile scams – Russia was in a condition completely unsuitable for any future development. Anything built in this context, any laboratory or university, immediately plunged into the abyss of a toxic lifestyle.

The restoration of churches and monasteries is truly the creation of huge sewage treatment plants which are to filter and processing the fetid waste of the 1990s. It is the construction of spiritual filters through which passes the poisoned spirit of the Russian people.

In his visit to Valaam, Putin stated that “without Orthodoxy, there would be no Russia.”

On the website of the Valaam monastery, they speak of the sincerity of the President’s faith. They state that visiting the northern shrines was a “turning point” for Putin and began a sincere conversion. He ensured that there was a minimum of meetings and no talk of politics. On August 16th of 2001 Putin first began his pilgrimage and acted like an “ordinary believer.” He walked the three kilometers to the main monastery to St. Nicholas’ skete. He then decreed that the island of Anzer be granted officially to the church and more specifically, the monastery of Solovki.

On the 1025th anniversary of the baptism of Rus under St. Vladimir, Putin stated:

Today, when people are again looking for moral support, millions of our fellow citizens see their Russian Orthodox religion as a beacon.

Trust the wise pastoral words of the Russian Orthodox Church. Her selfless, educational and social service demand respect. Her public authority and peacekeeping efforts aimed at strengthening the harmony and stability of Russia, as well as her efforts to restore the historical ties among peoples, and especially with our compatriots abroad, has been her legacy.

It is also important that a new level of state-church relations has developed.

We act as genuine partners and as co-workers in solving the most pressing domestic and international challenges in the implementation of joint ventures for the benefit of our country and people.

On the 90th anniversary of the restoration of the Patriarchate, Putin stated:

The Patriarchate of the Russian Orthodox Church helped the people survive the agony of the 20th century. It helped defend the faith, to unite the flock and to save not just the church, but the ideas of Christianity. And later, already in a revival of religious life, the Church has helped continue his tireless service.

And today, we appreciate the desire of the Russian Orthodox Church to return the ideals and values to Russian society that for centuries were our spiritual landmarks (Putin, 2007).

It is common to condemn Putin for being a “KGB agent.” the truth is that the security services of any nation attract nationalists. Few doctrinaire Marxists existed in the USSR. This is the exclusive domain of capitalist universities. Putin has condemned Marxism and communism. He has stated that the fall of the USSR was a great “catastrophe.” Indeed it was: Solzhenitsyn said the same. The destruction of the Soviet economy in a few years and its liquidation into the bank accounts of a few Jewish oligarchs is well known. The USSR was preferable to the 1990s in Russia. The life expectancy of the Russian male went down to under 60 years.

To be a career man of any kind in the USSR, one had to join the party. Spouting a few slogans that no one believed is a minor price to pay for the ability to feed one’s family. Putin clearly (albeit secretly) rejected the party’s atheism. He was and is a Russian nationalist. My book, Russian Populist: The Political Thought of Vladimir Putin (TBR Press, 2012) shows this at great length. I’ve translated some speeches and writings that have not seen the light of day in the west. The revelations of Putin’s secret baptism make sense out of his post-soviet career and ideological development.

(NB: Readers should buy directly from The Barnes Review (the publisher of this book) due to the fact that Amazon and other retailers are deliberately charging outrageously high prices for it).

Putin – Defender of the Faith, President Vladimir Putin, December 12, 2012 at St George Hall of the Grand Kremlin Palace on Constitution Day in Russia