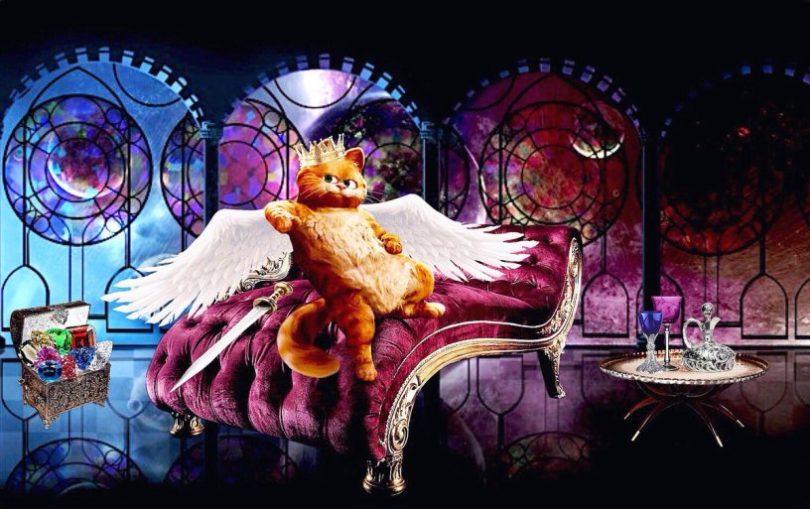 Fire, fire, run for your life…. Here, brought for you some colorful glass from Notredame, because they don’t need it any more.

What’s there…. When the savior, from the cartoon, travels on his boat under one of those he-goats, that’s when everything collapsing, the spire of Notredame and other roofs.

Here he is traveling under this he-goat, and everything collapses around him.

[From the translator: After some major tragic events people often find “signs” pointing at these events in works of art, or some other way. For example, scene from the “Matrix” in the film, Neo’s passport is clearly shown to have an expiration date of ’11 SEP 01′ some two years before the 9/11 attacks.

The rule of thumb, when this sort of “signs” appear before an event, it always, ALWAYS means that this tragic event was choreographed and staged, and that those “signs” were planted before an Event during it’s preparatory stage.

After the “event” it’s author always have bloggers, or journalists to point out at the “coincidence.”

People who are behind all of this intend on messing up with people’s minds, confusing them and, ultimately driving them away from Christ as possible.

Same with all those made up fake “signs.”

Matvey wrote a couple of weeks ago about another sad character from the Pet Goat II named Juan, who drowns in some green swamp. In the cartoon this character even looks like Juan Guaido. Initially the children of Satan who ordered the cartoon, not necessarily those who actually made it, had a completely different meaning of the events in mind. Venezuelan people were supposed to be depicted under this character drowning helplessly in some lime-green goo. But, something went terribly wrong for those “masters of the game.” Someone or something interfered, unexpectedly, turned everything around and, playing on the similarity of the names, destroyed Juan Guaido’s mission, turned him into a clown drowning in some slow moving green goo.]

What would I want to say, says Matvey, I just want to remind you how just recently we all together watched how the other side uses a small detail in the cartoon, not even in the cartoon itself, but a name of the character mentioned by the producer in his interview, completely changed the meaning of the real events.

Here with he cartoon we have exactly the same event when the stinkers cooked up something, but someone, whom no one expected interfered, and this changed the events, while the scenario of the cartoon remains the same.

So, what do we have here? We have here the moment when the last leg of the journey is completed, and it follows by an awakening of the Savior. [In past years, Matvey connected other events with the cartoon scenario as they were unfolding. S.H.] It doesn’t matter what the stinkers had in mind when they invented this character, but this cat was always saying that he is our Messiah, because angels are coming to us and they fight in Heaven on our side. The cat meowed to you all that long time ago.

The cat also knows another meaning of this cartoon, the one placed in it by the divine particles, but I cannot say it out loud. I tried every which way, posted poems here, and pictures, and told stories. I can’t say it as it is, because I can lose my tail if I say too much.

BTW, we all remember how the Salvator Mundi, a painting disappeared just before burning down the Notre Dame cathedral.

The painting was sold by some Russian billionaire to some Arab, and “went missing.”

Someone asked the Cat was it good or bad that the painting went missing. the cat wrote that it was good. I can’t write what exactly happened, but these are the links in the same chain.

This morning, the Divine particles made me laugh regarding the fire in Notredame, don’t you get too much into this. Why? because what the children of Satan consider the symbols of western Christianity ARE NOT THEM. They have become something completely different. They have turned into an old stinky parody which needs to be destroyed. So, when the children of Satan cook up their “events,” God is not being damaged (I think this is clear), the real Christians, or the souls, don’t suffer at all, because this all has become a pile of shit mixed with horny monkeys, demons, and the “kings of israel” that never existed in our reality.

I beg you, what kind of kings could be among dirty cattle hoarders, that couldn’t build and invent anything themselves, even some simple underwear. What needs to be understood is that none of those kings and everything else ever existed in reality of our world. They are going to work for the next fifty years restoring this, so.

Never get upset over the bricks, because no brick falls down without a reason from Heaven.

The Divine particles brought to me this image this morning, and the cat was rolling with laughter. Just you look at this!

France accepted our pyromaniac They themselves decided that it was a good idea to take him in!

And they got burned! This is so funny. This is a riot.

This is a personage from the Matrix for you. If the Divine particles planted him there, so we would understand that the entire kerfuffle is a part of the Matrix.

The Salvator Mundi… The Savior of what world? of THIS world:

How to save THIS world? By the means of purification. just like this:

This is a destroyed temple in Syria. For two thousand years, this was a place of worship of those who pray in Aramaic language, in the language of Jesus Christ… this was a village of wrong Syrians, and France fought the war against them.

and here is your Notredame

Nothing is accidental, in other words, a brick won’t fall on your head out of blue.

It wasn’t the cat who dug an abyss in the heart of Paris. Here is the great mystery of pyramids for you. That’s where the cathedral went.

That’s it. The cat is tired. I need to come up with something, because I don’t have strength for any of this.

Dear friends, millions of people read Cat Motya’s blog, but only about 20 support his blog.

At the top of his blog there is a form to donate.