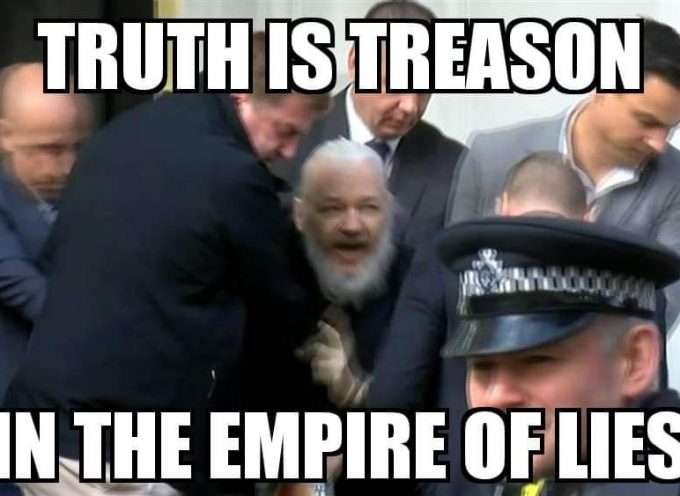 By Chris Faure for The Saker Blog

It is hard to believe that Assange may end up in the tender care of the vicious: those that run Washington; those that treat Venezuela with state terror; and who daily kill in Syria, in Yemen, in Afghanistan, and a dozen other places.

Shame, Shame on those that are celebrating this miscarriage of justice and attack on freedom.  Shame on Democratic Sen. Joe Manchin that bellowed:  So now he’s our property and we can get the facts and truth from him.  The Senate Intelligence Committee vice chair Mark Warner said his hope is that British courts will “quickly transfer” Assange to US custody “so he can finally get the justice he deserves.” Sen. Ben Sasse, a Republican from Nebraska, another member of the Intelligence Committee, said Assange’s arrest is “good news for freedom-loving people.” and “Julian Assange has long been a wicked tool of Vladimir Putin and the Russian intelligence services” and “He deserves to spend the rest of his life in prison.”

Shame on the Patriots that are thrilled and are literally rejoicing to see Assange arrested.  Their message is the same as that of Senator Manchin.  So now he’s our property and we can get the facts and truth from him.   They are sure that taking away this man’s freedom, and making him US Property by extraditing him to the US, will force him to testify so that they can ‘lock her up’ and the swamp will be drained. Are you still slave owners Patriots, trying to make this man your property?  You like to say:  “We have the source”.  Are you now into owning others or do you truly not understand what you are saying?  The source does not have you!

You are being led up a garden path. Consider Pompeo:

Wikileaks is a non state hostile intelligence service aided and abetted by the Russians.

Read this again, slowly:  Wikileaks is a non state hostile intelligence service aided and abetted by the Russians.

This is the administration that is trying to get its hands on Julian Assange.

What is not said in the Patriot youtubes of which I watched too many in the last hours, is that:

Assange lived in an Embassy with a Cat for Company for 7 Years to AVOID this exact same rendition.

Somehow the Patriots do not mention this or pay any attention to the violation to this man’s rights, but they dare rejoice in a rictus of a 4D chess delirium!

It will not be a friendly rendition and he will be moved with handcuffs and ankle restraints.  Is this what you want for this man?  Can you pause your rejoicing for one moment and start working to get him out of the shackles and out of jail?  Or do you want ‘her’ to walk free while you rejoice that Assange is shackled?

Have you no shame, Patriots?  Assange is not your plaything or your slave to sacrifice on your ‘Lock her Up’ Altar.  Are you such wussies that you cannot lock her up all by yourselves?  Can you not fight your fight against the Democrats all by yourselves?

Go and join the rest of the human world and work to get Assange released: https://www.change.org/p/free-julian-assange-before-it-s-too-late-stop-the-extradition

Do you not understand that if this man’s rights are violated to the extent that they are, yours and mine can be violated in a similar way, in a New York minute?  When will they extradite me for saying these things?

Do you not understand that Assange did not skip out of that embassy in joy into the loving Patriot arms to be borne on angel’s wings of innocent rendition to the US to testify of his own free will and volition.  He was dragged out against his will and is in prison – Belmarsh prison, as far as we know.

Do you not understand that this man does not want to be rendered forcefully to the US and has nothing criminal to answer for in the US?

Craig Murray writes: To support the persecution of Assange in these circumstances is to support absolute state censorship of the internet. It is to support the claim that any journalist who receives and publishes official material which indicates US government wrongdoing, can be punished for its publication. Furthermore this US claim involves an astonishing boost to universal jurisdiction. Assange was nowhere near the USA when he published the documents, but nonetheless US courts are willing to claim jurisdiction. This is a threat to press and internet freedom everywhere.

Do you not understand that Assange represents all of the rights of humankind?

And how are you going to make him testify Patriots?  Are you going to coerce him by torture?  The same as what is reportedly being done to Chelsea Manning right at this time because she does not want to testify against Assange.  Have you not thought about that?  Have you not thought about freedom of speech and freedom from persecution for no crime?

Have you not thought that the US could have given him securities of safe passage and freedom before now, in exchange for testimony?  Why did they not do this? Is this not the humane way of doing things instead of jailing the man? Do you really think keeping him in a jail cell before and after rendition is the right thing to do? Do you not think that this rendition under cover of espionage or helping Manning to break a password or ask for more information or some other trumped up charge cannot be increased by further accusations and charges? Of course they will throw their book at Assange.  Do you not get it that Mr Trump did not actually state anything about the separation of powers for a independent judiciary as the Patriots now present, but that the cock crowed when Mr Trump denied knowledge of Assange and Wikileaks just days ago? Do you not get it that the US administration wants to punish Assange for publishing their atrocities and that he is not being extradited to speak on ‘Hitlery’ and her crimes?

Yes, I hear the stories.  Bring him to the US, make him testify and Mr Trump will pardon him and life will be all roses for everyone.

Pardon him for what?  He does not need to be pardoned.  He needs to be set free.

Understanding the timing issues is also necessary.  Theresa May is hanging by a thread.  It was necessary for these authorities to move now against Assange, as the risk of Corbyn taking over is too big. Corbyn would just let the man Assange go free as he said.  Understanding that the Ecuadorian elites were rewarded with a massive IMF loan for their help in this issue, is also necessary. They were bribed and paid off with ‘the Benjamins’ baby!. It stinks to high heaven and yet, the Patriots rejoice and forget this piece.

Note that the usual dehumanization methods are being used against Assange now, to soften up the population to think he was just a dirty and messy filthy person that nobody would want to have around.  We did not see or hear any of this with the former Ecuadorian President, Rafael Correa.  Note, that this former president was devastatingly clear in stating what Ecuador did in inviting British Law Enforcers into the Ecuadorian embassy, but I cannot give you a direct quote because they cut off his Facebook account and made him unable to comment.  Does this sound fine to you? Do you realize that just a year ago, one of the Wikileaks reporters was killed?  Do you get it that in Ecuador another Wikileaks reporter has just been arrested?

Does this all portray to you a sweet and innocent rendition of Assange to the US where he will be put into a summer-camp jail and not coerced at all?

Assange should be freed to continue his work and so far the proceedings create a dark precedent that affects us all. Tulsi Gabbard has it right.

Assange Arrest: The message is clear. To journalists and all Americans, if you try to take away our power, you will pay a high price.

Shame on those that are celebrating and claiming ownership of this man Assange like property to use shamelessly for their own political purpose and burn him as sacrifice on their own altar.

The World’s voices are again raised in collective outrage.

Real journalism is being criminalized by thugs in plain sight. Dissent has become an indulgence.

When will they come for you, or for me, or for you Patriot?  The extradition has to be stopped.