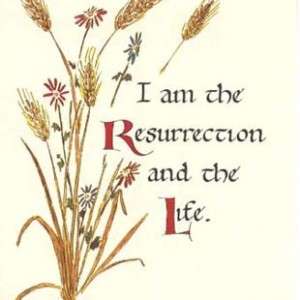 Jesus said this to Martha, Lazarus’ sister, before the lifted the stone from the entrance to the tomb and He raised her brother from the dead.

Then he continued, “He who believes in Me, though he may die, he shall live. And whoever lives and believes in Me shall never die” (John 11:25-26).

In another place the Lord Jesus says, “he who believes in Him who sent Me has everlasting life, and shall not come into judgment, but has passed from death into life” (John 5:24). For the believer, death becomes sleep, or rather a crossing into eternal life. It becomes a Passover.

Here He is speaking about the resurrection that happens in our life here, in faith in Him. The Apostle Paul discusses this resurrection and says that it happens in the mystery of baptism: “Therefore we were buried with Him through baptism into death, that just as Christ was raised from the dead by the glory of the Father, even so we also should walk in newness of life” (Romans 6:4). The grace of the resurrection is embedded in the depths of the heart from baptism, says Saint Diodochos of Photiki, from baptism it is a divine planting, potential energy that awaits, on account of our freedom, the first step in order to become active in our life and become kinetic energy, just as gasoline in a car awaits the driver with the key in order to activate it and drive.

For someone who struggles and loves Christ, says Saint Basil, this grace is active in all his members when we receive the Body and Blood, even in the senses of the extremities. Our eyes become Christ’s eyes. Our mind becomes Christ’s mind… This is the first resurrection or, rather, a foretaste of the general resurrection.

Jesus alone is the light, the truth and the life. This light is traced upon us in joyful behavior, kindness and humility. The resurrection translated in the believer is all of life.

Christian spirituality is a paschal spirituality. Christ’s passion is not a site of grief, but a site of joy. The Lord Jesus told His disciples before His passion, “Most assuredly, I say to you that you will weep and lament, but the world will rejoice; and you will be sorrowful, but your sorrow will be turned into joy” (John 16:20).

We want the mystery of the resurrection of Christ our God to be realized within us. If, in the likeness of Christ’s passion, we enter into the tomb of humility and repentance, He enters into our body as into the tomb, in His union with our souls He raises them, as they are truly dying. And in this way He makes us who are risen worthy with Him of seeing the Glory of His mystical resurrection.