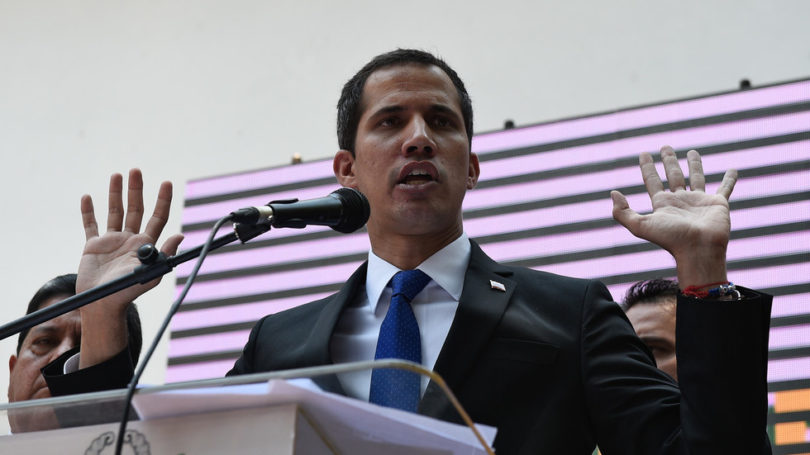 The ongoing crisis in Venezuela has taken a new twist, as Nicolas Maduro’s government barred the US-backed parliament leader Juan Guaido from holding public office for 15 years over irregularities in financial records.

The move was announced by state comptroller Elvis Amoroso on Thursday. The 15-year-ban – the longest possible – comes as a result of an audit launched into Guaido’s finances back in February.

The self-proclaimed ‘interim president’ has been accused of lying on his personal financial disclosures and receiving funds from irregular sources. Guaido had ultimately failed to explain the origins of funds he spent on travelling abroad since joining the National Assembly, according to Amoroso.

The US-backed opposition leader was not, however, intimidated by the lengthy ban, calling his supporters to stage more protests.

“We’re going to continue in the streets,” Guaido said soon after Amoroso’s speech was aired on state TV.

Guaido’s response to the ban was to declare the Constituent National Assembly, which appointed Amoroso to serve as the comptroller general in October last year, is not real.

“There is no comptroller, there is no constituent [assembly], that mister was activated and pulled out of the dust to sow fear in the hotels that housed us,” Guaido said.

With Guaido acting as though Venezuela’s actual government is no longer in power, Washington has been hard at work boosting the credibility of his claim to the office. US President Donald Trump’s wife Melania hosted Guaido’s wife Fabiana Rosales in the White House on Wednesday, with establishment media referring to Rosales as the Venezuelan “first lady”and “first-lady-in-waiting”.

The exchange comes ahead of mass rallies – both for and against the legitimate government of President Maduro – scheduled for Saturday. The country is now recovering from a second major blackout in less than a month, with the government and opposition trading accusations about what’s behind it.

While Caracas maintains that the blackouts were caused by cyber-attacks and saboteurs directed by the US, the opposition and its supporters cite them as a proof of the alleged incapacity of Maduro’s government.