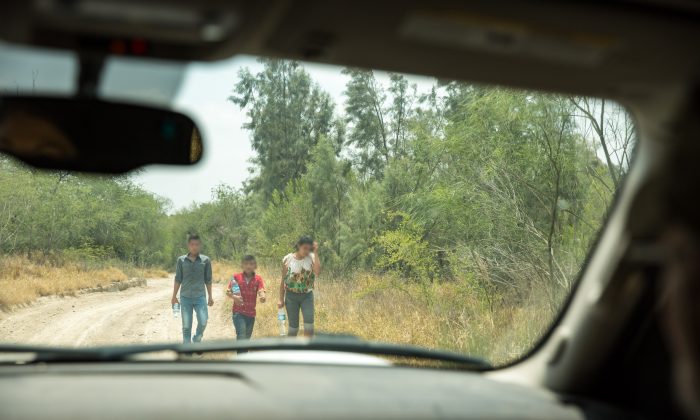 Hundreds of thousands of people head to the United States every year in search of a better life, many by paying a smuggler thousands of dollars to get them in the back door—across the southwest border illegally. Others, as in the recent bust of a sex-trafficking ring in Florida, are lured by temporary work visas and then forced into servitude.

“Many times, you’ll see parents [who] want their children to have a better life … send their child along with a friend, a cousin,” he said.

“And along the route—which is a long journey to the United States—the smugglers will then exploit the children. They’ll say, if you don’t pay us additional money, or if you do not perform these types of activities—some of which are sexual activity, some of them could be forced labor—we will kill your family back home.”

The scope of the problem is mind-boggling, going by a recent estimate by expert Timothy Ballard.

Ballard, founder of the anti-trafficking organization Operation Underground Railroad, said that as many as 10,000 children are trafficked into the United States every year to be used as sex slaves. Nevano concurs with Ballard’s estimate.

Previously, Ballard spent more than 12 years working as a special agent for Homeland Security Investigations in its child trafficking unit.

He recounted a story of a 13-year-old girl from Central America who was kidnapped from her village, then trafficked into the United States across an unpatrolled part of the southwest border.

She was taken to New York City. “This little girl—and this is very typical—was raped for money every day, 30 to 40 times a day,” Ballard said during a White House roundtable on Feb. 1.

Last year, the number of Border Patrol apprehensions along the southwest border almost hit 400,000. This year, it’s on track to pass 600,000 illegal crossers. The vast majority hail from Central America.

More than 48,000 unaccompanied minors were apprehended by Border Patrol in fiscal year 2018. Almost half were from Guatemala, and the rest were from Honduras, Mexico, and El Salvador.

Marlene Castro, a former supervisory Border Patrol agent in the Rio Grande Valley sector in Texas, said no one crosses the Rio Grande into the United States without paying something.

“It could be cash, it could be jewelry, some possession of yours, or whatever, but you’re going to pay,” Castro said in a 2017 interview.

“They hire this smuggler, someone they don’t even know, and they trust him on this 800-, 1,000-mile journey. Even if they’re paid with cash upfront or whatever, lots of times these people risk being assaulted, beaten, robbed by these people.

“There are cases where the women—with the expectation of getting raped—prepare themselves by getting on birth control, or taking birth control, for the purpose of the journey.”

Alma Tucker has seen the devastation that victims of sex-trafficking endure. She is the founder and president of International Network of Hearts, an organization dedicated to helping children recover from human trafficking.

But it was while she worked as the Mexican consul general in San Diego that her life was impacted forever.

“[The girl] was only 14 years old, and the smuggler—the parents paid the smuggler to bring her undocumented to the mountains, to this country. But the smuggler told her that her parents didn’t pay a full amount for her transportation, and she had to pay,” Tucker said at the White House on Feb. 1.

“She had to pay with her own body, and have sex with all the people in the group. Then go through this journey. And they forced her to have sex 20, 30 times until Border Patrol rescued her, and they transferred her our way to the hospital. And I was there; they called me.”

Tucker said she stayed with the girl through everything: the medical examinations, the interviews, and the search for her parents.

The problem isn’t new, and it happens many different ways. Nevano shared a story from two decades ago, when he was an airport customs inspection agent. He encountered an 18-year-old attempting to enter from China on someone else’s passport.

“At the time, we had more challenges with technology. There wasn’t biometrics,” Nevano said. “He finally admitted to me the truth—his family paid $40,000 for that U.S. passport in 1996, and they sold everything that they had to have their child come to the United States for a better life. The challenge was, they only made a down payment of like $10,000, so this individual owed $30,000.

Instead, Nevano said the man claimed political asylum and still lives in the United States.

“We have seen cases where children have been posed as family members coming in a familial relationship,” he said. “And it turns out that person is trafficking that child to the United States and bringing them for the illicit purposes of human trafficking.”

The National Human Trafficking hotline has received reports of 45,308 human-trafficking cases since 2007. California, Texas, and Florida are identified as the worst three states for human trafficking.

ICE made 1,588 human-trafficking arrests in fiscal year 2018—almost all for sex trafficking—and saved 308 victims who were trafficked to the United States.

Nevano said traffickers use all means of coercion and false promises to control their victims.

“They beat the children, the women, if they don’t continue to perform, if they don’t earn money, if they try to flee,” he said. “If they’re here undocumented, they take their documentation. They basically will extort them by saying that if you don’t perform these acts, we will call ICE, and ICE will come and arrest you.”

Nevano said despite sex trafficking being so pervasive in American society, finding and investigating cases is challenging.

But a community approach would make a bigger impact.

Dr. Jordan Greenbaum, medical director of the Child Protection Center at Children’s Healthcare of Atlanta, said the medical community is on the front line.

Greenbaum said in one study of adults and adolescent girls who were sex-trafficking survivors, 88 percent said they had seen a health care provider while they were being exploited, yet none of them had been identified in the health care setting.

“What does that say to us? It says that victims are coming to get health care, but we’re not recognizing them,” she said last year. “We have yet to see a victim come in and say, ‘My chief complaint, my concern, is human trafficking.’ They don’t self-disclose spontaneously.”

Nevano said that deportation protection is available for those victims who are in the United States illegally.

“We need to make the victims aware that we’re here to help them. We also have to be able to help them, getting them the services that they need: the NGO assistance, clothing, food, shelter,” he said. “At the same token, we also want to prosecute the traffickers who are involved in this heinous act.”

The National Human Trafficking Hotline is confidential, toll-free, and available 24/7 in more than 200 languages.