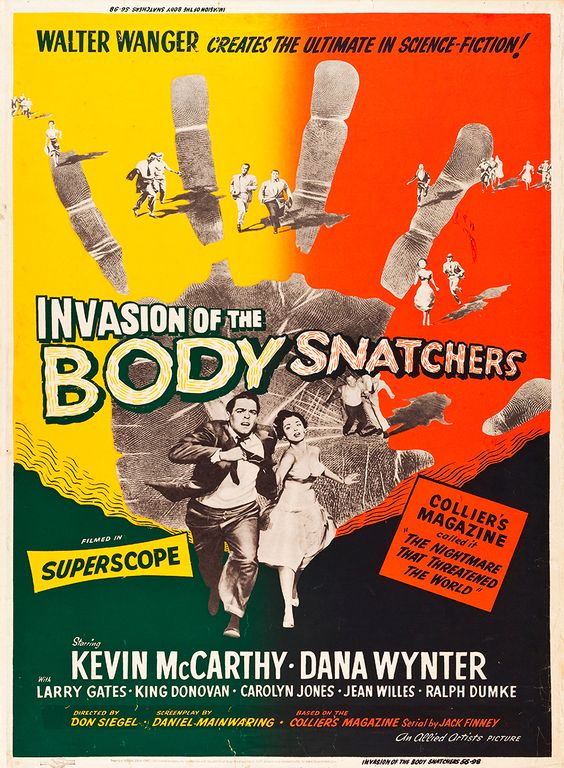 In The Invasion of the Body Snatchers, (1956) humans are replaced by mindless and emotionlessduplicates, grown in pods spawned by seeds from outer space. This is an apt metaphor for satanic possession.

It reads like a bad script for a 1950’s horror movie. Humanity is colonized by a satanic cult. Everyone must secretly pledge allegiance to this cult if they want to advance. Members are compromised and blackmailed to ensure loyalty.

Although this cult’s monuments and symbols are everywhere, no one dares to mention its name, or challenge its dominance.  Political leaders constantly make Masonic hand signs in plain sight but no one dares ask why.
Certain subjects and people are unmentionable. Question 9-11 or the Holocaust and you will lose your job.
Entertainers must join the cult and perform satanic acts of sexual abuse and/or child ritual murder to attain success. They must endure a punch in the eye, a ritual called “soul scalping.”

Children are introduced to drag queens, learn about gay sex and are encouraged to change their gender.

Murphy’s law is true. If it can go wrong, it will. For humanity, it has.

Western society has been colonized by this cult. The so-called “enlightenment” represents a rejection of the Creator’s design for humanity. This entails a denial of the very existence of God.

A tiny clique of Cabalist bankers, the Illuminati, have supplanted God (i.e. the natural and moral laws of the universe) in the specious name of “humanism,” “reason,” “progress” — masks for Satanism, Socialism, Communism, and globalism. Millions of leftists and liberals have been inducted into this cult at the lowest level. These are the people going hysterical at the election of Donald Trump. They already act like cult members, possessed, no longer human.
Here a woman writes to a liberal friend, “I knew you would take the loss hard-and personally-since all of you were super jacked-up to elect the first woman president. But I did not imagine you would become totally deranged, attacking anyone who voted for Trump or supported his presidency as a racist, sexist, misogynistic, homophobic Nazi sympathizer.

The weirdness started on social media late on Election Night, as it became clear Hillary was going to lose. A few of you actually admitted that you were cradling your sleeping children, weeping, wondering what to tell your kindergartner the next morning about Trump’s victory. It continued over the next several days.
Some of you seriously expressed fear about modern-day concentration camps. Despite living a privileged lifestyle, you were suddenly a casualty of the white patriarchy. Your daughters were future victims; your sons were predators-in-waiting. You threatened to leave Facebook because you could no longer enjoy the family photos or vacation posts from people who, once friends, became literal Hitlers to you on November 8 because they voted for Donald Trump.I admit I was a little hurt at first. The attacks against us Trump voters were so personal and so vicious that I did not think it could be sustained. I thought maybe you would regain your sanity after some turkey and eggnog.
But you did not. You got worse. And I went from sad to angry to where I am today: amused.
TRUMP
The West has been colonized by these liberal-Leftists financed by Rothschild consigliere George Soros and his army of Freemasons, Jews, and diverse minorities. But Christian civilization is finally waking up thanks to the Internet.  The election of Donald Trump has returned a little sanity into current affairs, even as liberals become more insane. I am encouraged by the selection of conservatives to the Supreme Court.
I dislike Trump’s Zionism but even if he weren’t a Zionist, he’d have to pretend, given their importance and their control of the Evangelicals. I’m hopeful he represents a genuine division in the ruling elite but doubt it.
The subversion of humanity by the Illuminati Jews and Freemasons is the suppressed true history of the modern world. This is the only real conflict; Illuminati versus humanity.
The Protocols have been realized. The Illuminati want to be God. They want to extend their monopoly over government credit and currency into a monopoly over everything. They contrived all the revolutions, the world wars, the Cold War, Korea, Vietnam, the JFK assassination, 9-11, Iraq, Afghanistan, and Syria. They are responsible for false flag terror.
They engineered women to fear and distrust men, better to divide and conquer. They are responsible for “sexual liberation” (aka enslavement) which reduces all human relationships to a cheap ejaculation. They use sex to systematically degrade us, to make us their cattle.

We’re free in a limited individual sense, thank God. But collectively, we are being farmed. If they really cared about freedom, they’d empower us. They’d teach individualism, civic values, patriotism, and history. They’d foster strong male-female relationships, marriage, and families.

Humanity suffers a form of arrested development. We are in a trance. Sequels and remakes. Nothing new, or true. We’re not going to make our intended rendezvous with our Creator.
But the war is not lost. I am hopeful there will be a Conservative Resurgence. They are being exposed.Eventually, they will all be punished. I am encouraged by Brexit and the election of conservative/nationalist governments in Hungary, Italy, and Ontario. We must redouble our efforts to resist the alien (occult) invaders.