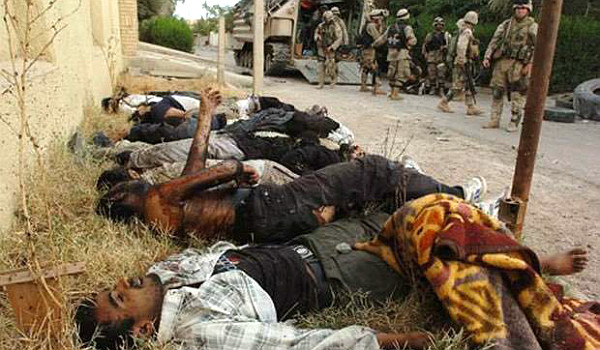 United States Secretary of Defense “Mad Dog” Mattis tendered his resignation Friday. It’s hard to even imagine what the interpersonal dynamics were between the psychopaths that resulted in this, but does it even matter? Good riddance.

We note that the authoritarian followers are wishing Mathis well. But as way of background, “Mad Dog” Mattis led U.S. troops during the 2004 siege of Fallujah in Iraq. His philosophy was expressed when speaking to a group of soldiers about how to behave in Iraq during a 2003 speech: “Be polite, be professional, but have a plan to kill everybody you meet.”

With Mattis departing the helm of the Pentagon, a revisit of the 2004 siege of Fallujah is timely and illustrative. Falujah was primarily a terror operation against 275,000 innocent civilians living in the city. More than 200,000 civilians were displaced from their homes during the November siege, and over 75 percent of the city was destroyed.

U.S. marines, under Mattis’ command, killed so many people — one U.N. estimate says 90 percent of them were civilians — that the municipal football stadium of the city had to be turned into a graveyard. Marines shot at ambulances, at aid workers and posed for trophy photos with the dead that they had killed. Here unarmed wounded enemy combatants are murdered in cold blood. Second video, American goons driving down the road shooting other drivers with no consequences.

In separate terror operations against Iraqi civilians — specifically the Haditha and Hamdania massacres — Mattis granted clemency to goons who were already convicted for atrocities, freeing them from prison.

In 2010, U.S. atrocities in Afghanistan were revealed. It’s report included a description of a kill team of 12 brainwashed American goons staging killings of three Afghan farmers in cold blood for sport and then posing over the trophies. Goon Corporal Jeremy Morlock, 22, (shown below) confessed to the murders. He was given 24 years in prison. The ringleader was given a life sentence, and nine other proto-psychopaths (in Winter Watch lexicon a proto is someone caught up in a psychopath’s drama and crime) got off with lighter sentences. Five members participated in the murders and seven others were charged with impeding an investigation and attacking the whistle blower.

An article in Rolling Stone magazine revealed these acts were openly discussed and debated in Bravo Company for weeks. Der Spiegel only published three of the photos, but Rolling Stone also published the photos the authorities didn’t want you to see.

Among the men of Bravo Company, the notion of killing an Afghan civilian had been the subject of countless conversations, during lunchtime chats and late-night bull sessions. For weeks, they had weighed the ethics of bagging “savages” and debated the probability of getting caught. Some of them agonized over the idea; others were gung-ho from the start.

The details are here. An outlier? Yeah, you say so, but we seriously doubt it. Staff Sgt. Calvin R. Gibbs, 25, described as the ringleader by other defendants, bragged that it was easy to get away with “stuff” when he served a tour of duty in Iraq in 2004.

Use of White Phosphorus on a Densely Populated City

The use of deadly white phosphorus on a densely populated city was unreported by any western lugenpresse journalists at the time. Rumors had swirled that the Americans used chemical weapons indiscriminately on the city.

In December, the U.S. government formally denied the reports, describing them as “widespread myths.”

Read:  The Weaponization of Depleted Uranium: A Deadly Dust Crime Against Humanity

Following pressure from former Labour MP Alice Mahon, the British Ministry of Defence in 2013 confirmed the use of MK77 by U.S. forces during the initial invasion of Iraq.

In mid-June 2017, rights groups reported that the U.S.-led coalition had used white phosphorus in Mosul and Raqqa.

The U.N. Convention on Certain Conventional Weapons of 1980 only allows its use against military targets. Its use against a city like Gaza and Fallujah constitutes war crime. The chemical is ejected in a burst, and can be picked up by wind. Thus, it has no precision for military targeting, well illustrated in the following photo of an Israeli burst spreading out over Gaza

Finally, a documentary was produced by RAI, the Italian state broadcaster, entitled “Fallujah: The Hidden Massacre.” It provides clinching evidence that incendiary bombs known as MK77, a new, improved form of napalm, was used in the attack on Fallujah. It was aired in Italy on Nov. 8, 2005, but received a news blackout elsewhere.

In this instance, there is actually a decent Wikipedia piece online that describes the details of the Fallujah experience. The film is still on Youtube (see below).

U.S. Marine turned antiwar-activist Jeff Englehart discussed the use of white phosphorus by U.S. service members in built-up areas and describes the Fallujah offensive as “just a massive killing of Arabs.”