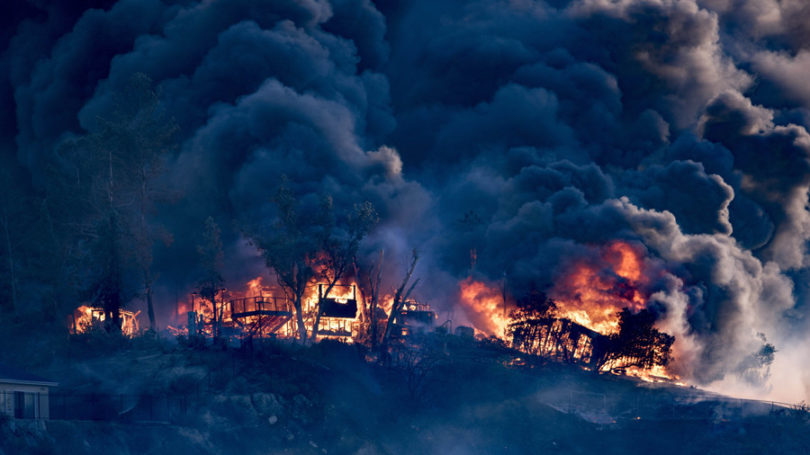 As firefighters struggle to contain the wildfires ravaging Southern California, the firestorm of the #MeToo movement continues to burn out of control across America from Hollywood to Washington, D.C. with no end in sight.

Last week wildfires fueled by the hot, dry, and at times hurricane-force Santa Ana winds, raged across numerous locations in Southern California. Ventura County, which is just north of Los Angeles, has been hit particularly hard as over 230,000 acres have been scorched with more than seven hundred homes destroyed thus far.

In the fire’s shadow, Los Angeles has at times resembled a scene out of a disaster movie with black, acrid smoke filling the air accompanied by white ash gently falling to the ground like snow. Air quality was so poor across the city that most schools and parks were closed for the week.

Synchronistically, just as this devastating wildfire was ravaging Los Angeles, another inferno that got its start in Hollywood was wreaking havoc across the country and in Washington D.C., in particular. That out of control wildfire is the #MeToo sexual harassment scandal that torches everyone in its path, leaving in its wake a pile of ash where careers used to be.

It started back in October with the revelations of film producer Harvey Weinstein’s decades-long reign of sexual terror upon a cavalcade of women in the movie industry. The Weinstein conflagration quickly spread to other egregious sexual offenders in the movie business, such as director/producer Brett Ratner, director James Toback and actor Kevin Spacey and then to tertiary celebrities such as actors Jeremy Piven, Dustin Hoffman and Jeffrey Tambor, along with comedian Louis CK, who all felt the fury of courageous #MeToo whistleblowers.

In Washington, the Democratic Congressman from Michigan, John Conyers, Arizona Republican Trent Franks and Democrat Senator Al Franken all resigned amid sexual harassment allegations. Then, this week, Alabama Senate candidate Roy Moore lost his election after several allegations surfaced that Moore had a predilection for underage teenage girls when he was in his thirties.

While many celebrate the success of the #MeToo bonfire at bringing down these high profile men who have used their power to assault or harass their victims, I am less enthused about the direction of the blaze. The problem with the #MeToo campaign is that it is not a controlled burn and is more akin to the wildfire of a sex panic or hysteria.

A “controlled burn” is when, in as controlled a manner as possible, the detritus on the forest floor is burned away to avoid a more extensive, uncontrollable conflagration at a later date. The righteous fury of the #MeToo wildfire has resulted in not only the sick and rotted trees being torched, but the healthy ones as well, with no apparent interest in making any differentiation between the two.

An example of the uncontrollable nature of #MeToo is that it refuses to make any distinction in severity between rape, sexual assault, sexual harassment, groping or lewd and boorish behavior. For example, Al Franken, who is alleged to have “groped” or given unwanted kisses to four women, is lumped into the same category as Harvey Weinstein, who is accused of raping and sexually assaulting over 80 women and has paid out millions to settle sexual harassment lawsuits. Another example is Emmy award-winning actor Jeffrey Tambor, who denies allegations that he made lewd comments toward two transgender women working with him on his show Transparent, is placed in the same category as Kevin Spacey, who is alleged to have sexually assaulted or harassed dozens of young men, some as young as 14.

As it is with all panics and hysterias, the #MeToo movement has officially banished nuance from any discussion and wholeheartedly embraced a draconian zero tolerance. New York Senator Kirsten Gillibrand made that perfectly clear this week when in a speech calling for Al Franken to step down said,

“When we start having to talk about the differences between sexual assault and sexual harassment and unwanted groping, we are having the wrong conversation. We need to draw a line in the sand and say none of it is okay, none of it is acceptable.”

The emotionalist raging wildfire of #MeToo also does not allow for due process, and the burden of proof now falls on the accused and not the accuser. For instance, Senator Franken, who denies the allegations against him, requested a Senate ethics investigation into the charges in order to best unearth the truth, but in perfect Democratic party self-immolation style, Franken’s colleagues, Senator Gillibrand leading the charge, demanded he step down instead, due process and search for truth be damned.

Another foundational belief of the #MeToo movement, which just won Time’s Person of the Year Award, is to “Believe All Women,” the end result of which is that the word of every woman is sanctified and proof is never a necessity. Just like the L.A. wildfires, #MeToo is designed to be indifferent to guilt or innocence and is ultimately only meant to perpetuate its own existence and feed its voracious appetite by blindly devouring anything or anyone in its way.

By creating this environment where alleged victims are deified and can never dare be doubted, #MeToo has all but guaranteed that allegations of a sexual nature will be weaponized by those who wish to destroy men whom they deem to be their personal, professional or political enemies, regardless of the guilt or innocence of the targeted men.

Gillibrand’s takedown of Franken is a perfect example of how the movement is a political weapon in what is starting to look like a gender war. Like an arsonist torching a bankrupt business for the insurance money, Gillibrand put the fire to Franken to elevate her political profile in the hopes of a presidential run in 2020. Her maneuver paid off as she is now hailed as the Democrat’s bravest and best hope to topple Trump.

Despicable men in public life are being held to account for depraved sexual behavior, that is a long time coming and much deserved, but in the vengeful, scorched-earth fury of the #MeToo movement, innocent men may have their names besmirched as well.

Some will say, “who cares” if some innocent men are caught up in the flames. That sentiment is understandable considering the history of men in positions of authority using their power for sexual means, but it is ultimately self-defeating. The reality is that this current sex panic will end, sooner or later. No matter how hot it burns, no wildfire can last forever. And when the #MeToo wildfire burns itself out, and the fever is broken, there will be a terrible backlash against those who cynically misused it for their own purposes.

As intoxicating as it can be to get caught up in the whirlwind of righteous vengeance pulsating at the heart of #MeToo, the shaming and punishment meted out in cases like Franken and Tambor for instance, does not seem to fit the alleged crime.

It is deeply disconcerting that supporters of the campaign are so blinded by emotional fury that they are incapable of stepping back, letting their white-hot emotions subside and allowing the cool waters of justice to flow.

It would be a much wiser and more rational course of action for #MeToo to follow the wisdom of one of America’s Founding Fathers, Benjamin Franklin, when he said, “Better that 100 guilty persons escape than that one innocent suffer.”

Considering that in the #MeToo panic, rational thought is in short supply and wild-eyed emotion rules the day, it is a near lock that Ben Franklin’s sage advice will be entirely ignored in favor of torches and pitchforks. In fact, if Ben Franklin were alive today there is little doubt he would be labeled a #MeToo heretic by his enemies, or worse yet, tarred as a sexual predator and tossed by the mob into the flames of the #MeToo bonfire to the raucous chant of “Burn Baby Burn.”