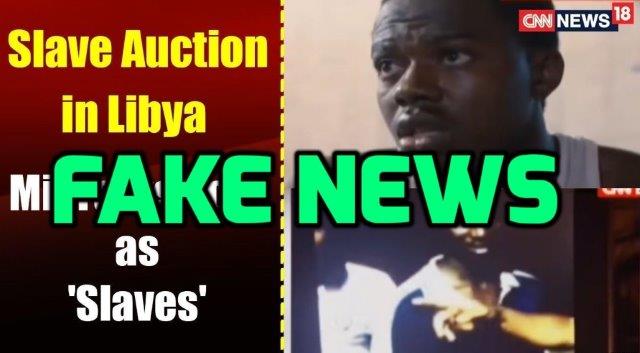 Just so every person reading this article understands clearly…

“THE NEWS ABOUT SLAVERY IN LIBYA IS A LIE”

The Great Tribes of Libya have confirmed to me personally that the slavery stories out of Libya are fake. The photos and videos are old and re-edited. I know this is true because I have some of the photos and videos in my files from 2011. Since the Zionists do not have Ghadafi to slander, they are now attempting to gin up hatred for Libya again – accusing the Libyans of doing what their own mercenaries did in 2011.

In the 2011 invasion and destruction of Libya by the New World Order (NWO) Zionists, over 250,000 radical Islamic mercenaries were brought into Libya by Clinton and Obama using NATO as their proxy army to assist in the heinous crimes committed against the innocent Libyan people. At the top of the list of crimes against humanity was the attempt to ethnically cleanse Libya of all dark skinned people. The criminal mercenaries supported by Clinton/Obama/McCain/Sarkozy and others made no bones about their intentions and it was reported in a number of publications.

In Libya, about 30% of the population is dark skinned. These are Libyan citizens, not mercenaries and not refugees. During the 2011 illegal attack on Libya, 5 black Libyan cities were raised to the ground by NATO mercenaries. The people who lived in those cities were either slaughtered or forced to live horrendous lives in miserable makeshift camps. I have proof of this, I have photos of the mass graves of mostly black bodies in Libya. There are over 128 of these mass graves. The criminals responsible for this are the UN, the Western Imperialists (US, UK, France and others that joined the death bombings of innocents in 2011), Israel, the Saudi Arabian Wahabists, Qatar and Turkey. But the criminals who are at the top are the Khazarian Mafia, the evil Rothschild Banksters that control the military industrial complex using their fiat toilet paper and reaping benefits from both sides of any conflict.

In Libya today, the people suffer terribly at the hands of the UN Zionist puppets. These criminals have destroyed Libya beyond the bombing and destruction of 2011. They have stolen Libyan resources, they have destroyed (intentionally) the value of the Libyan dinar (before 2011 was 1.35 dinar for 1 US dollar, now it is 8 dinars for 1 US dollar). There is little food, no medicine, water is restricted, electricity is always short, no jobs, armed thugs roam the streets. The UN puppet government that was forced upon Libya without a vote and without the support of the Libyan people, does absolutely nothing to help the people. There is no governing, there is only theft. Recently, Serraj, the criminal head of the UN puppets stole 50 million dinars and gave it to a terrorist militia leader, bribing him to attack the Wershaffana tribe in Tripoli. The Wershaffana tribe is the 2nd largest tribe in Libya and holds the gates to Tripoli. The UN puppets see themselves losing so they take desperate measures, all the while the Libyan people continue to suffer.

Even still these Zionist puppets are losing. The Libyan tribes (representing all Libyans) continue to gain ground against the hated illegal occupiers of their country.

There is another big problem that the Zionists have in Libya. Looming in the very near future is a countrywide election to elect a new leader and a new government by the people. There is not a chance in hell that any puppet, any terrorist, any rat Libyan traitor or any radical Islamist will be elected. That throws out all of the Zionists, all of the illegal occupiers and hands Libya back to her people. This event will not be tolerated by the Zionists, they must maintain their illegal control of Libya and her assets. What to do? The same answer as always a “false flag” LIE to promote their agenda. That lie was put out by CNN this week and picked up by all the Zionist controlled media mafia. “Slave traders in Libya”- their new lie fomenting (they hope) a required invasion of Libya – again.

Meanwhile, the CIA is not finished, of course. They are promoting the slave trade mantra and providing old videos and photos, but they also have their long time stooge, Khalifa Haftar, on the ground in Libya attempting to promote himself into a leadership position in Libya. Haftar is a Libyan rat TRAITOR to his country. He turned against his country during the Chad wars and when Chad was losing he was spirited out of Africa by the CIA along with about 30 of his treasonous comrades to Langley, VA., where he resided for more than 30 years supported and owned by the CIA. In 2011 he as dropped into Libya to lead the mercenaries sent in to destroy Libya. Sometime in 2012, Khalifa Haftar had a change of heart and said he wanted to help clean Libya of the mercenaries he had been leading. No one believes this, Haftar was just complying with the orders of his CIA masters. He wormed his way into the Libyan National Army and bribed enough rats inside the House of Representatives to appoint him leader of the LNA. Even still he has no support in Libya. Recently, his true colors have begun to show again, 30+ dead Libyans found outside of Benghazi along the rode had been prisoners of Haftar. He assassinated all of them. He has also hired a lobby group in Washington DC to promote his soon to be (in his dreams) leader of Libya.

The latest Haftar trick is a petition (to make him leader) that he is promoting all over Benghazi. He is attempting to get enough signatures to show that he should be leader. But he is having trouble getting signatures so he is offering money if you sign. You have to wonder how Haftar has enough money to pay for signatures, to travel all over the world, to purchase his arms (no one else in Libya can get arms), to can hire a lobby group in DC for $20,000 per month, etc. The Libyans have no ability to pay a salary big enough to support all of his activities. It is incredibly obvious that the CIA is funding him and giving him orders. What is sad is the exploitation of the suffering Libyan people, having all their lives ruined by the Zionists, just to have those same Zionists offer them $ to do their bidding. The Zionists create a situation so horrible that in order to survive they turn brother against brother.

Still the Libyan tribes fight on, they are moving ahead and they know that in the end they will have their country back. The dark state, the cabal, the Khazarian mafia, whatever you want to call it, cannot penetrate the tribal structure. They are like a family and they know if one of their members has been compromised. We were told by the DIA agent in our home that never in the history of the world has any intelligence group penetrated the tribes in any country. This is the power of the Libyan Tribes, the Egyptian tribes, the Syrian tribes, etc. They will not be broken, they have existed for over 8000 years, they will prevail.