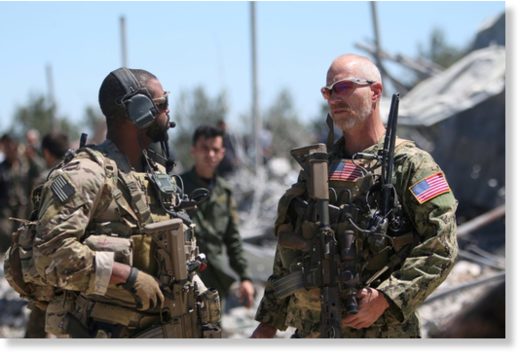 For more than six years, Syrians have made great sacrifices to defend their country in the face of a terrorist war of unprecedented brutality…. The Syrian people have stood their ground, against all odds, because they knew that this was a war that sought to eliminate their country, and with it, their own existence. They are an example to follow by any people who might face, now or in the future, similar attempts to break their will and deny them their freedom and sovereignty.

Washington has delayed its project to throw up an iron curtain along the eastern banks of the Euphrates River in order to deploy its Kurdish shock troops deep into Deir Ezzor province. The Syrian Defense Forces or SDF have been blitzing southward for nearly a week to head off the steady advance of the Syrian Arab Army (SAA) and their elite Tiger Forces. The SAA’s stunning triumph in Deir Ezzor has knocked Washington for a loop triggering all manner of erratic behavior including rocket and mortar attacks on SAA troop positions, a US-coordinated stealth attack in Idlib province, and numerous other provocations meant to divert attention from the main strategic objective, the lucrative Euphrates Valley oil fields.

At present, the SDF is in the best position to liberate the oil fields from ISIS’s control. One must ask, however, why the SDF has suddenly diverted its attention from the siege of Raqqa and hastily send its troops south to the oil fields if their intention was not to claim ownership of those fields and to prevent the regime’s forces from retaking them? That, in fact, is the only logical explanation for their behavior.

Clearly, the SDF is not acting on its own behalf, but merely following Washington’s orders putting itself at great risk (of direct aerial bombardment by the Russian Airforce) simply to placate Washington’s insatiable lust for oil. Here’s more from South Front:

“Tensions are rapidly growing between the US-backed Syrian Democratic Forces (SDF) and Syrian government forces in the province of Deir Ezzor, north of the provincial capital.

Last week, the SDF used the intense fighting between the Syrian Arab Army (SAA) and ISIS and seized Isba and Tabiyeh oil and gas fields located north of Khusham village on the east bank of the Euphrates.” (South Front)

The actions of the SDF confirm that the US-backed militia can no longer be seen as a Syrian ally assisting in the fight against ISIS. The SDF is yet another hostile, insurgent group that is implementing Washington’s imperial agenda. The only question is whether the Syrian Army and their allies will deal with the group as harshly as they have with ISIS. But, of course, the SAA has no choice in the matter since the SDF is trying to seize vital resources that are crucial to the Syria’s survival. In short, US-backed proxies and Russian-backed coalition members are going to clash militarily because Washington has eliminated any other option. Here’s more from South Front:

“On Monday, the (mainly Kurdish) SDF media wing directly accused the Russian Aerospace Forces of bombing its positions near the Conico gas factroy….The SDF Command released a statement accusing Russia of supporting ISIS against the SDF:

“The Russian and regime forces launched an attack on our fighters in Conico Factory… with cannons and warplanes. The bombardment resulted in martyring and wounding a number of the fighters. It is worth noting that we are advancing in coordination with the Global Coalition Forces…

We strongly condemn the Russian aggressive attacks and their allies that serve terrorism, and we assure that we would not stand idly by, and we would use our right in the lawful defense.” (South Front)

The so called “Global Coalition Forces” is a Washington invention that was never invited to fight in Syria and which violates Syria’s sovereignty. Also, the claim that the SDF will ‘lawfully defend’ itself against the forces of the sovereign government is not worthy of a comment. The SDF has no legal right to conduct military operations on Syrian territory.

Also, by its own admission, the SDF is trying to seize the Conico Gas Factory. And, on Monday, they continued their surge southward capturing Ibsah and Taibah oil fields and pushing further towards Jafra fields.

Does Washington think that Assad and Putin are too blind to see what’s going on?

Of course, not. Washington is focused on oil, and its proxies are doing its handiwork. It’s as plain as the nose on your face. But, there’s one glitch: If Washington wants Syria’s oil, it’s going to have to fight for it.

On Sunday, The Russian Ministry of Defense released aerial images showing that US Army special forces are either collaborating or have reached some kind of accommodation with ISIS units in the Deir Ezzor area. It’s an interesting story, but it is hard to draw any clear conclusions based on the photos. What is undeniable, however, is that the US-backed forces seem much more focused on oil than they are on ISIS. Not surprisingly, ISIS has taken full advantage of the situation by launching a lethal decapitation attack on the Russian high-command. This is from Moon of Alabama:

“Last night a Russian three-star general and two colonels were killed in a mortar attack while they visited a Syrian army headquarter in Deir Ezzor:

Lieutenant-General Valery Asapov, of the Russian armed forces, has been killed after coming under shelling from Islamic State (IS, formerly ISIS/ISIL) militants near Deir ez-Zor, the Russian Defense Ministry has announced. In its statement, the ministry said that Asapov was at a command outpost manned by Syrian troops, assisting commanders in the liberation of the city of Deir ez-Zor.
…

Lieutenant-General Valery Asapov is the highest-ranking Russian officer to be killed in the Syrian campaign. He was a commander of the 5th Army in Russia’s Eastern Military District.”

For three years ISIS had besieged Syrian troops in Deir Ezzor city and its airport. It had not once managed to successfully attack the Syrian headquarter or to kill high ranking officers. Now, as U.S. proxy forces “advised” by U.S. special forces, have taken position north of Deir Ezzor, “ISIS” suddenly has the intelligence data and precision mortar capabilities to kill a bunch of visiting Russian officers?

That is not plausible. No one in Damascus, Baghdad, Tehran or Moscow will believe that…” (“Syria – U.S. CentCom Declares War On Russia”, Moon of Alabama)

Moscow has already drawn its own conclusions about Washington’s roll in the General’s death. There will be retaliation, that much is certain. More important, the mask of US involvement has been stripped away leaving the two adversaries standing face to face. Lines of communication remain open, but they’re useless when both parties are determined to capture the same scrap of land. Disputes like this, are typically settled on the battlefield which is where this one is headed.