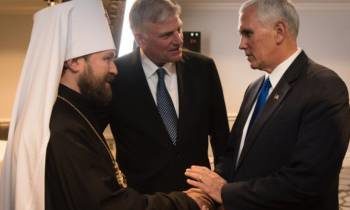 Some very big names – Pence, Buchanan, Franklin Graham, Rick Joyner, and many others are involved. And Liberals hate it.

It looks like the close cooperation between Russian and American Christians is gathering steam again.

There was a lot of hobnobbing and event-going during the Obama years, but many American groups felt compelled to back off in 2014 when the Ukraine hostilities and the demonization of Russia in the media reached fever-pitch.

But now those memories are fading, and the same old bonds are pulling the natural allies back together.

Think Progress, the ultra-liberal Hillary think tank, published a horrified article about all this in July.

It is very long and well researched, and very helpfully gathered a lot of good news and great information in one place. Thanks TP!

1. Evangelical heavy-weight, Franklin Graham is a big fan of Putin and is working closely with the Russian church:

Rev. Franklin Graham, a prominent member of the Religious Right and the son of evangelist Billy Graham… published a Facebook post voicing optimism about a potential Trump-Putin partnership.

‘The media and enemies of President Trump have tried to drive a wedge between Russia and the United States,’ writes Graham, who is known for spouting Islamophobic and anti-LGBTQ rhetoric, wrote. “Our country needs Russia as an ally in the fight against Islamic terrorism. Join me in praying for President Trump and President Vladimir Putin as they have this very strategic meeting.”

Graham, working tandem with Russian church officials and select few of his right-wing Christian colleagues, has already formed an alliance with the Russian president – all while Putin continues to use faith as a tool to accrue power.

Actually Graham comes to Moscow regularly, meets with Putin and the head of the Russian church, and fully supports Trump’s idea of allying with Russia.

2. Russia has become the global leader of the Christian Right, gaining increasing support from American Christians

The push against the liberal west slowly won converts the world over, with Russia analyst Casey Michel describingthe country in February as “the leader of the global Christian Right.”

“American fundamentalists bent on unwinding minority protections in the U.S. have increasingly leaned on Russia for support – and for a model they’d bring to bear back home, from targeting LGBT communities to undoing abortion rights throughout the country,” Michel wrote in POLITICO.

3. Anti-LGBT groups in Russia and the US are working together:

As the Atlantic’s Jonathan Merritt observed in January, the World Congress of Families – an anti-LGBTQ rights group – was conceived in Moscow and its head said in 2010 he believes American evangelicals can be “true allies” of their conservative Russians.

Other anti-LGBTQ groups such as the American Family Association, American Center for Law and Justice, and National Organization for Marriage (NOM) have all endorsed various anti-gay legislation in Russia. NOM head Brian Brown even traveled to Russia to testify on behalf of anti-gay legislation and deem Putin a “lion of Christianity.

Evangelical leaders such as pastor Rick Joyner have also spoken favorably of Russia in the past year, and Ken Ham – an ardent creationist who erected both the Creation Museum and the Ark Encounter in Kentucky – praised Putin’s jabs at the West in a Facebook post in 2014.

“Putin is actually seeing what is described in Romans 1 happening before our eyes in the USA (and the West in general) and being exhibited before the world. We are in a massive spiritual battle – I pray the church wakes up,” Ham said, referencing Putin’s rejection of LGBTQ rights.

In 2014, Franklin Graham published an opinion piece about the Russian president’s decision to sign a law barring the distribution of “propaganda of nontraditional sexual relations” to children.

He also lauded Putin’s pledge to protect Christians in Syria, noting how it was “one justification for his support of the Assad regime in Syria.”

“It’s obvious that President Obama and his administration are pushing the gay-lesbian agenda in America today and have sold themselves completely to that which is contrary to God’s teaching,” Graham wrote. “In my opinion, Putin is right on these issues. Obviously, he may be wrong about many things, but he has taken a stand to protect his nation’s children from the damaging effects of any gay and lesbian agenda.”

5. Pat Buchanan, a prominent conservative leader and former presidential candidate is on board:

Just a month later, Pat Buchanan – another leader of the Religious Right – published his own piece about Russia potentially replacing the U.S. as a bastion of “Christian values,” asking “Whose side is God on now?

6. Mike Pence, famous for his strong conservative, Christian stance on social issues, is on board too:

Vice President Mike Pence, an outspoken religious conservative sometimes described as a “theocrat,” delivered a speech at the event and reportedly met with Hilarion backstage to discuss how Russia and the U.S. could cooperate on Middle Eastern counter-terrorism efforts.

The conversation brought Pence – who once said it’s “inarguable” that Putin is a better leader than Obama – into the ROC’s orbit.

“Mike Pence was not involved in these networks before, but now he is,” Stroop said. “He now seems to be facilitating some of the stuff involving the Russian Church.”

All of this is excellent news, as far as we can see.