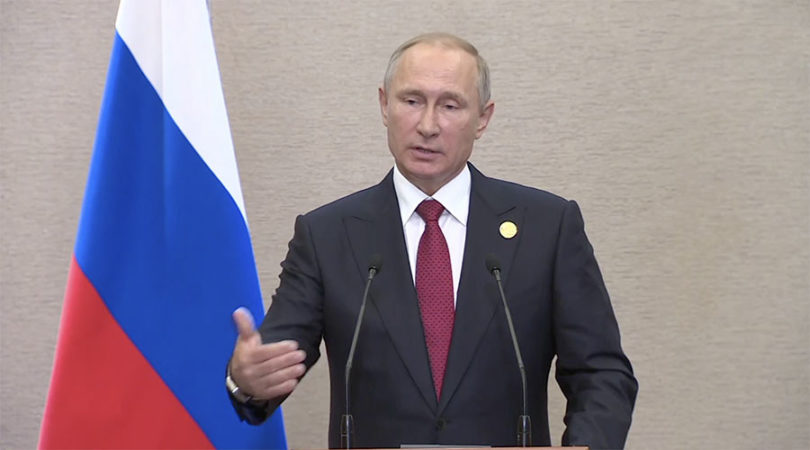 The examples of Iraq and Libya have convinced the North Korean leadership that only nuclear deterrence can protect them, so no sanctions can dissuade them, Russian President Vladimir Putin said.

Pyongyang will not relinquish its military program under pressure of sanctions and military threats, because the examples of Iraq and Libya have convinced it that nuclear deterrence is the only credible way to ensure its security, President Putin told journalists on Tuesday.

“Ramping up military hysteria in such conditions is senseless; it’s a dead end,” he added. “It could lead to a global, planetary catastrophe and a huge loss of human life. There is no other way to solve the North Korean nuclear issue, save that of peaceful dialogue.”

The 2003 US-led invasion of Iraq and the 2011 NATO intervention in Libya both came after the leaders of those countries submitted to international pressure and relinquished their programs of weapons of mass destruction in exchange for sanctions relief.

North Korea for its part chose confrontation with the world community, successfully developing nuclear weapons and currently, rapidly perfecting the means of their delivery.

“As I told my colleagues yesterday, they will eat grass but will not stop their program as long as they do not feel safe,” Putin said. “What can restore their security? The restoration of international law.”

Russia reserves the right to expel a further 155 American diplomats

Moscow may order the US to recall 155 more American embassy staff to restore true parity of personnel between the embassies of the two nations, Putin warned.

“We have agreed with our partners that there should be parity of the number of diplomatic staff in Russia and the United States. There were some 1,300 diplomats from the US; we had 455. We corrected this.”

“But among those 455 diplomatic staff working in the United States there are 155 people working at the United Nations. Strictly speaking, they are not part of the diplomatic corps accredited by the US State Department,” he added. “So true parity would be the US having not 455 diplomats in Russia, but 155 fewer.”

Putin said Moscow reserves the right to have that number of US diplomatic staff moved out of the country.

The Russian president also aimed a barb at the Republican Party by saying that it was “difficult to deal with people who confuse Austria with Australia,” referring to a 2007 gaffe by former President George W Bush.