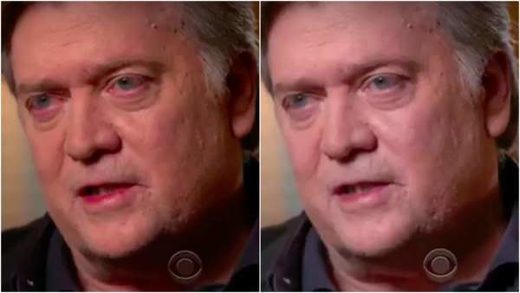 “It seems like 60 minutes would like you to listen less and look more at Steve Bannon. By subtly tweaking the color of the video, they make him look like a bleary-eyed drunk. I show you how they did it,” writes Duke on the video’s YouTube page.

In the video, Duke explains how CBS color adjusted Bannon’s shots to make his eyes and lips red by increasing the level of saturation. This results in curtains that are a brighter orange behind Bannon than they are in Charlie Rose’s shot. Rose’s shot was made “cooler,” to make the host’s make-up more subtle.

GREAT VIDEO. Networks do this a lot. That's why conservatives seem to look so much better on Fox News. https://t.co/jWmP5YcYxQ

The result is a natural looking Bannon.

As author Ann Coulter pointed out, these types of mainstream media tricks aren’t done on Fox News – hence why conservatives look better on the channel.

Below is a transcript of Peter Duke’s video:

Former White House chief strategist Steve Bannon appeared on 60 Minutes with Charlie Rose and discussed a myriad of topics, from the GOP establishment trying to nullify Trump’s presidency to Hillary Clinton not being as smart as liberals always say she is . . .

“Her very first speech when she came off the beach was nonsense,” Bannon begins to Rose, “and this goes with something I want to address with you: Hillary Clinton’s not very bright.”

Bannon continues to describe the ways in which she failed during the election, and beyond.

Rose then pressed Bannon the ethno-nationalist descriptor she pinned to Breitbart and others on the New Right, but Bannon was quick to shut down the impending smear.

Rose asks, “Cause you want no part of ethno-nationalism?”

Bannon replies quickly, “That’s ridiculous on the face of it, it’s absurd . . .”

Rose: “You don’t want any part of any of those people?”

Bannon: “Not only is it morally wrong, it’s also totally irrelevant. Economic nationalism is what this country was built on, it’s the American system . .