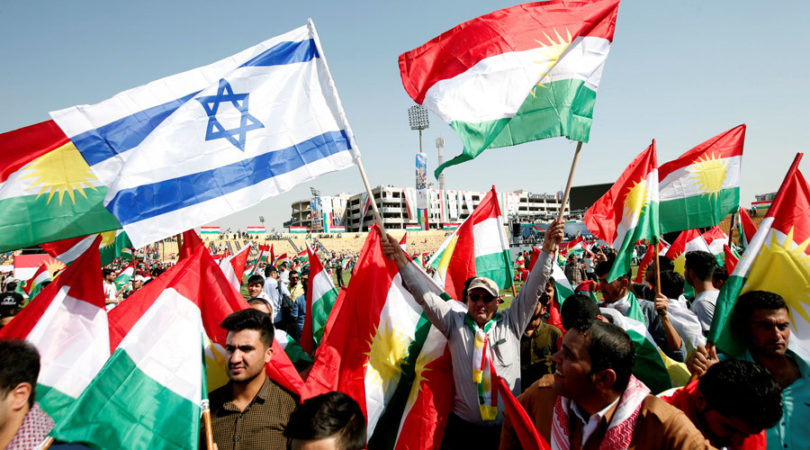 Turkish President Recep Tayyip Erdogan has warned that Iraqi Kurds will “not be able to find food” if Ankara decides to halt the flow of trucks and oil into the region, adding that all military and economic sanctions are on the table.

“[They] will be left in the lurch when we start imposing our sanctions,” Erdogan said in a speech broadcast live on television on Tuesday, as quoted by Reuters.

“It will be over when we close the oil taps, all [their] revenues will vanish, and they will not be able to find food when our trucks stop going to northern Iraq.”

Erdogan also warned that “flying Israeli flags” would not save the Kurdistan Regional Government (KRG) from regional isolation.

“If the only support for the KRG’s referendum is given by Israel and if the [outlawed Kurdistan Workers’ Party] PKK starts celebrating [the results] even before the polls close then there can be neither innocence nor legitimacy,” Erdoğan said, as quoted by Hurriyet.

The Israel reference comes after Prime Minister Benjamin Netanyahu expressed support for an independent Kurdistan earlier this month, while taking aim at Ankara’s support of Hamas.

“Israel opposes the PKK and considers it a terrorist organization, in contrast to Turkey, which supports the terrorist group Hamas,”Netanyahu said during a state visit to Argentina. “While Israel is opposed to any kind of terrorism, it supports the legitimate means of the Kurdish people to obtain their own state.”

A halt in Ankara’s supply of oil to the region would be welcomed by Baghdad, which has asked foreign countries to stop direct oil trading with the region.

Erdogan also warned that all options – from economic sanctions to military measures – are on the table. Although the Turkish president has repeatedly warned of sanctions, he has so far provided few details.

However, retaliatory moves following the referendum may have already begun, according to a Turkish broadcasting official who told Reuters that Turkey has pulled Kurdish TV channel Rudaw from its TurkSat satellite service.

The Turkish president’s comments come just one day after the KRG held an independence referendum, prompting Erdogan to accuse the KRG’s president, Massoud Barzani, of “treachery” over the vote.

“Until the very last moment, we weren’t expecting Barzani to make such a mistake as holding the referendum, apparently we were wrong,” the Turkish president said in his Tuesday speech.

“This referendum decision, which has been taken without any consultation, is treachery.”

Barzani has stressed, however, that the vote is not binding. Rather, it is aimed at prompting negotiations with Baghdad and neighboring countries over a peaceful breakaway of the region from Iraq.

“The referendum does not mean independence will happen tomorrow, nor are we redrawing borders,” he said. “If the ‘yes’ vote wins, we will resolve our issues with Baghdad peacefully.”

However, Baghdad has said it will not hold talks with the KRG on the results of the “unconstitutional” referendum.

“We are not ready to discuss or have a dialogue about the results of the referendum because it is unconstitutional,” Iraqi Prime Minister Haider al-Abadi said in a speech broadcast on state TV on Monday night.

Turkey, Iran, and Syria are also against the secession of the region, fearing it will inflame separatism among their own ethnic Kurdish populations.

Meanwhile, Ankara and Baghdad banded together in a show of force on Tuesday, with their militaries holding joint military exercises in southeast Turkey, near the border with Iraq’s Kurdistan Region.

Although official results of the referendum are expected by Wednesday, initial results indicated that 72 percent of eligible voters had taken part in the referendum, and that a huge majority – perhaps over 90 percent – had voted ‘yes’ to independence, according to Rudaw.