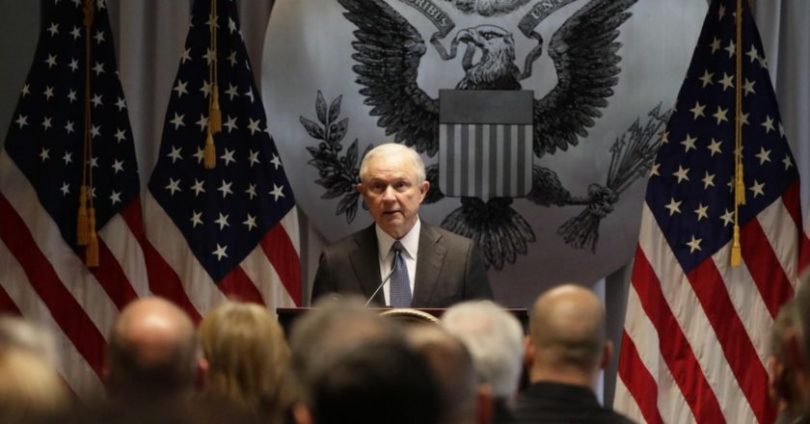 Attorney General Jeff Sessions and Director of Intelligence Dan Coats finally heed President Trump’s demand for an investigation of the leaks which have been destabilising his administration.

That Donald Trump’s Presidency is being effectively sabotaged by a campaign of leaking from inside the US government bureaucracy is disputed by no one.

That many of these leaks flagrantly violate the law and have been used in the most unethical way – for example to engineer the removal of General Michael Flynn – is rarely said, but is also undoubtedly true.

That former top officials of the preceding Obama administration are involved in these leaks, and that the viscerally anti-Trump media is actively colluding in the serial law-breaking involved in the leaks, is also widely known and is also undoubtedly true.

It is now clear that my expectations in February that an investigation of the leaks would quickly take place I wildly underestimated the extent of the resistance to the President’s call.  It turns out that it was not only Sally Yates at the Justice Department who was resisting the President’s demand for an investigation of the leaks but that this resistance extended right across the bureaucracy.

A key figure in defeating the President’s wish for a proper investigation of the leaks was almost certainly former FBI Director James Comey, who seems to have developed a strong personal dislike of the President and to have been acting working against him, probably because he had convinced himself that the fantastic conspiracy theories peddled about the President and his associates during the Russiagate allegations are true.

The President sacked Comey on 9th May 2017, in part at least because of Comey’s refusal to heed the President’s request for a proper investigation of the leaks.  Since then the FBI has been without a director, with Acting Director McCabe mistrusted by the President because of his closeness to Comey and his wife’s political ambitions.  It is now that the FBI finally has in Christopher Wray a Director of the President’s choice.

Today however we have a formal announcement from Attorney General Sessions and Director of National Insurance Coats that such an investigation is finally underway.  Here is a video of Sessions and Coats announcing it

Coats’s involvement is obviously key to the success of the investigation since he is able to mobilise the gigantic resources of the US intelligence community to support it.  The press conference however spoke of other more conventional tools – such as subpoenas of news organisations that peddle the leaks – being used to extract information and help identify the leakers.

I do not agree with those who deny the need for such an investigation by saying it will prevent whistleblowing.  Nothing about the leaks which have been been happening over the last few months resembles whistleblowing.  On the contrary they have been a cynical exercise in destabilising the President and his administration by using the media to spread anonymously damaging but uncorroborated stories about him.  As such they have not safeguarded democracy; they have undermined it.

I would add that complaints from mainstream media organisations like the Washington Post and the New York Times that the new leaks investigation threatens free speech looks to me especially ironic given the zeal of these organisations in seeking to close down what is called alternative media.

Whilst it is unfortunately possible that action which may now be taken against the leakers will create precedents which may in future be used against genuine whistleblowers, the blame for that will rest first and foremost with the media, who have thrown all journalistic standards aside by colluding in this cynical abuse of the practice.

Whether the leaks investigation which has now been announced will be effective remains to be seen.  If it is then it will drastically change the atmosphere around the President and his administration, as well as Robert Mueller’s Russiagate inquiry.

Before closing off on this question, I will make a few personal points on the subject of leaks:

(2) journalists should use anonymously leaked material very sparingly, should publish it extremely infrequently, and before doing so should where possible look to corroborate it from open sources.  They should always consider the possible motives of the leaker, and should ask themselves whether publication of the material genuinely serves the public interest as opposed to serving some other purpose;

(3) journalists always ought to consider very carefully the security implications of leaking anonymously sourced information, especially when it appears to come from the security services;

(4) last but not least, there is no doubt that some reported “anonymous leaks” are simply covers for journalistic inventions, and that is an especially strong reasons to be wary of them.

There are very few journalists today who I trust to handle and report anonymously sourced material properly and accurately, and I look with the deepest misgivings when it is handled by anyone else.  Amongst those journalists – or persons who exercise journalistic functions – I would include Julian Assange, Seymour Hersh, Robert Parry, Glenn Greenwald and one or two others.

Obviously this is something which requires very long experience and in-depth knowledge of a sort which is possessed by very few.  Quite obviously the army of journalists employed by CNN, the New York Times, the Washington Post, the Guardian and the rest, which have breathlessly repeated every story the anonymous leakers within the US bureaucracy have fed them, do not possess it.