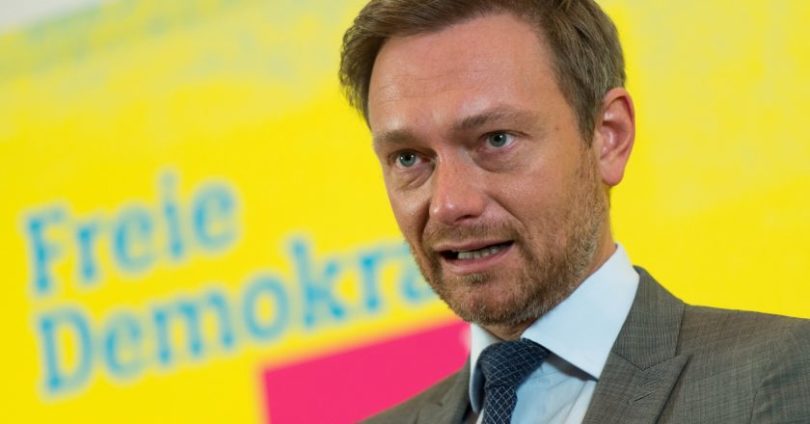 Crack in German consensus on sanctions as Christine Lindner head of Germany’s FDP says sanctions policy has failed and time has come to face reality by recognising Crimea as Russian.

Christian Lindner, the head of the German liberal FDP, has broken a taboo in German politics by saying that Germany should recognise Crimea as Russia as a “permanent provisional solution” and lift sanctions on Russia thereafter.

In making this call Lindner made the obviously true point that the sanctions are now working in that they have failed to change Russian policy.  The result is that relations between Germany and Russia and between Russia and Europe are suffering, as are the commercial ties between them.

The FDP is one of the important historic parties of Germany.  For much of German history since the end of the Second World War it has held the balance in the Bundestag between the CDU/CSU on the right and the SPD on the left, deciding which of these two blocs would form the government with the FDP the junior coalition partner.

Since 1998 the FDP has however struggled to retain influence as new parties such as the Greens, the Left Party and more recently the AfD have emerged in Germany.  In the federal elections of 2013 it fellow below the 5% share of the vote needed to secure a place in the Bundestag, though it is expected to win enough votes to re-enter the Bundestag in the forthcoming federal elections in November.  There have even been some suggestions that after the election it might resume its old role as a junior partner in yet another coalition led by Angela Merkel.

Whether this is what happens or not, the importance of Lindner’s comment is that for all its recent problems the FDP is very much an establishment party, in fact – because of its long history in government – arguably the most establishment party in Germany.

When the leader of the FDP therefore says however that the sanctions policy against Russia has failed and that Crimea should be recognised as Russian – even if only as part of some “permanent provisional solution” (whatever that means) it necessarily carries more weight than when the same thing is said by politicians of the AfD and the Left party or retired politicians of the CDU or SPD.

Moreover there is no doubt Lindner’s opinions are widely shared across the German political establishment, even though others might be more wary to say them.  Suffice to say that German Foreign Minister Sigmar Gabriel and CSU leader and Bavarian Minister-President Horst Seehofer – both frequent visitors to Moscow – are widely suspected of holding these views.

The key point however is that Lindner openly expressed these opinions whilst Germany is going through elections.  Though his comments have been roundly denounced – most vehemently by the now fiercely anti-Russian Green Party – presumably Lindner would not have said them if he did not think that many Germans – including much of the German business community – would agree with him.

However three events have happened this year which may be causing opposition to the sanctions in Germany to harden.

Firstly there is the dawning realisation in Germany that Russia – far from being crushed by the sanctions – is coming strongly out of recession, and is increasingly forging closer economic links with China as German and European businesses are becoming frozen out.  There must be increasing numbers of German businessmen who must be wondering whether Germany might be in danger of missing the bus.

Secondly there is the real anger in Germany at the latest sanctions law recently passed by the US Congress and signed by President Trump.  Not only does that law obviously target Germany’s energy links to Russia – overwhelmingly viewed in Germany as a fundamental economic interest – but many Germans must now realise that Germany itself in effect opened the door to this law agreeing to impose sanctions on Russia in the first place.  Inevitably that must make more Germans question the wisdom of Germany persisting with any anti-Russian sanctions at all.

Lastly there is the growing sense of distance between Germany and the US.  This goes beyond German hostility to President Trump, but also takes in US pressure on Germany to increase military spending and such vexing issues as the campaign the US authorities are waging against the German car industry on the subject of toxic diesel emissions.

It remains to be seen whether Lindner and the FDP in the face of the pressure they are coming under will stick to the positions on Crimea and sanctions that Lindner has just expressed, and beyond that there is the overriding issue of what the outcome of the forthcoming German elections will be.  However Lindner’s comments suggest that the direction of the wind is changing.