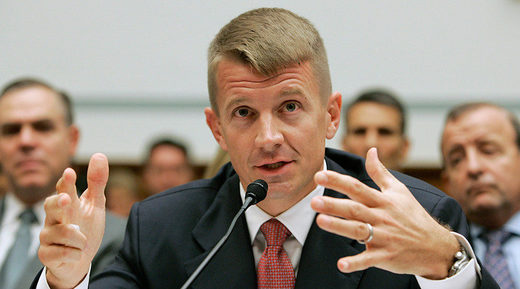 The White House has reviewed a proposal to outsource the job of training and assisting Afghan forces to private contractors, said Erik Prince, founder of the private security firm formerly called Blackwater.

In several recent op-eds, the Blackwater founder suggested “restructuring” America’s presence in Afghanistan by replacing US troops training and assisting Afghan security units with private contractors on a long-term basis.

Prince’s new security company, Frontier Services Group, will bid for the government contract should the Trump administration take up his Afghanistan proposal, he told C-SPAN on Friday.

“I was asked by the folks at the White House to elaborate on the op-ed I wrote to the Wall Street Journal,” Prince said. He did not say whether the White House gave him an answer.

Having fought the US for over 15 years, “the Taliban now are at their best,” Prince told C-SPAN. America’s conventional army is losing to guys “in pickup trucks and flip-flops,” he added.

In March, Prince offered Kabul to hire a private air-force to back the local army’s operations, the Military Times reported last week. Prince’s plan included providing “high speed response” as well as close-air support for Afghanistan’s army fighting the Taliban. The private air force’s fixed-wing planes, attack helicopters and drones would be flown by hired pilots, but “weapons release decisions will still be made by Afghans,” according to the newspaper.

Some of the people who called in to ask questions during the interview blasted Prince for pitching mercenaries to fight the war in Afghanistan.

“I don’t want to send my money to Mr. Prince or anyone like him,” said one caller.

Blackwater rose to infamy in September 2007, after its operatives gunned down 17 Iraqi civilians, including a 9-year-old boy, in Baghdad’s Nisour Square.

In 2010, the private security firm reached an agreement with the State Department to pay $42 million in fines for hundreds of violations of US export control regulations. The violations included illegal weapons exports to Afghanistan, making unauthorized proposals to train troops in south Sudan, and providing sniper training for Taiwanese police officers, the New York Times reported. They have since rebranded as Academi, while Prince went on to establish Frontier Services Group in Hong Kong.

The US-backed government controls about 60 percent of the country, down from 65 percent the same time last year, according to the US military headquarters in Kabul. Meanwhile, the Taliban is gaining ground. Last week, militants gained control of a key area in Afghanistan’s north Sari Pul province.

As of 2016, the Pentagon had around 26,000 private contractors in Afghanistan, about half of whom were assigned to logistics and maintenance duties, according to the US Department of Defense. The US currently has around 9,000 troops deployed in the country, on a mission to train and assist Afghan forces.

President Donald Trump reportedly lashed out at top US military officials in a July meeting for “losing” in Afghanistan and questioned whether America’s longest war is still worth fighting.

“We are not winning in Afghanistan right now,” Defense Secretary James Mattis told the Senate Armed Services Committee in June.

Mattis promised to deliver an updated strategy by mid-July, but the decision-making appears to have stalled.

This week, committee chairman Senator John McCain (R-Arizona) blasted Trump over the lack of Afghanistan strategy and offered his own plan for the Senate to vote on. It involves more troops, more bombing and an enduring US presence in the country.