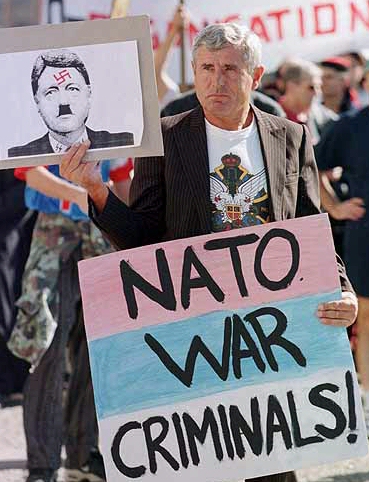 Victims of NATO’s war are suffering from cancers relating to the dropping of depleted uranium munitions during the illegal 1999 war on Yugoslavia.

Lawyers preparing to sue NATO in an international court for war crimes which took place during the illegal bombing of Yugoslavia in 1999 have confirmed that one of the charges they will raise is NATO’s use of depleted uranium munitions on civilian targets.

The highly toxic munitions continue to scar Serbia. According to lawyers for the victims,

The legal team is asking for monetary compensation for the victims in areas that have suffered disproportionally high cancer rates due to NATO’s use of depleted uranium.

The lawyers for the victims regard the bombings “as a violation of all the international conventions and rules that protect people”.

It should not be difficult to prove that NATO used these weapons in Yugoslavia as the  UN International Criminal Tribunal for the former Yugoslavia released a statement saying,

Likewise, a report from NATO dating back to the year 2000, published the with the somewhat ominous subheading, “to error is human”, admitted that depleted uranium was used both in the 1990 war on Iraq and also the 1999 war on Yugoslavia.

The illegal NATO war on Yugoslavia killed thousands of civilians and hit a substantial amount of civilian infrastructure including television stations, hundreds of homes, hospitals, bridges and the Chinese Embassy in Belgrade.

The results of the war have included the continued occupation of the Serbian province of Kosovo and Metohija and an ongoing refugee crisis that continues to displace hundreds, by some estimates, thousands of Serbian families.

The occupied Serbian province of Kosovo and Metohija has now  become a major hub of weapons trafficking, drug smuggling, human trafficking and perhaps most worrying, as has been in the case in neighbouring Albania, the province has become a European hub of the salafist terrorist group ISIS, something that now, even the pro-war New York Times admits.