In his 20 April statement to the UN, H.E. Bashar al Ja’afari reminded his colleagues that “Israel facilitates crossing by Al-Nusra Front terrorists across the ceasefire line,” treats them at Israeli hospitals and returns them to Syrian territory to resume their terrorist acts;” this  treatment alQaeda receives from Israel begins as state of art medical care on the Syrian Golan which has been occupied since 1967.

That Israel is not an official member of the US-led war criminal coalition has not prevented its dozens of illegal bombings of Syria, nor has it prevented Israel from flaunting its collaboration with the terrorists. In May 2013, IAF bombs were exploded on a food supply center, an SAA defense unit, and an SAA weapons depot in Damascus countryside — while its alQaeda cohorts videoed the  war crimes with their expensive camera equipment.  Later in May, the Syrian Arab Army discovered an Israeli Jeep in Qussayr.  It had been used by the FSA and was found to be the cause of radar jamming of SAA. 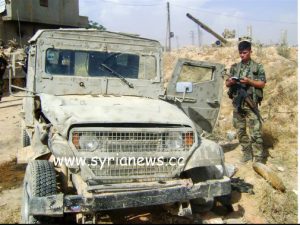 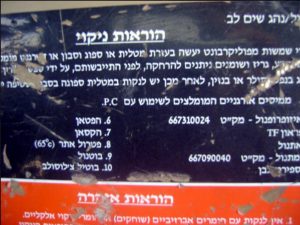 Also in May 2013, Israeli medium Ynet reported on an Israeli who lives in New Jersey, US, being part of a think tank meeting in DC, which involved two anonymous men claiming to be Syrian, calling on the US to bomb Syria. While one was speaking, the Israeli held up a flag of French Mandate occupation, and announced that his brother was an IDF medic on the occupied Golan (called “the Israeli occupation the world forgot,” by +972).  Somehow, the question is never asked as to why Israel does not concern itself with the Palestinians suffering under its occupation.

In February 2014, Netanyahu visited his terrorist troops in IDF MASH units on the occupied Golan. Those unable to receive state of art medical care in the field, were transported to hospitals in Israel.  NATO cheered the great trauma care in the same fashion Israeli media did, as actions of great humanitarianism (from a country committing ongoing slow genocide against Palestinians under occupation), ‘rebels’ fighting for ‘freedom and democracy.’

In May 2015 (again, May, as though it holds some secret significance, in Israel’s attacks on Syria), Israeli media switched gears, and reported that the IDF MASH units were now forced to treat “ISIS” terrorists, too.  In its backdrop story, Ynet claimed that the various takfiri gangs had so ‘driven back’ the Syrian Arab Army, and that the seniors, and women and children arriving were not in dire need, that the major trauma center had been closed, and all the non-combatant Syrians were taken directly to Israeli hospitals.  Then the unimaginable happened, and the various terrorist “rebel” gangs were shooting each other, forcing the beneficent country to re-open its major trauma unit to treat the newly injured — after they were checked for explosives, of course.  Again, the savages were treated with state of art medical care.  After the first belly wound operation, the IDF physician interviewed was nearly in tears over the joy in making friends with beheaders and mass murderers.

Also, in this month of May, Ynet happened to report on an Israeli organ trafficker having been arrested in Erdoganstan.  The trafficker had previously been arrested in Israel, but managed to flee authorities, and had been on the loose for some time — even sought, unsuccessfully, by Interpol.  This is noteworthy, considering that the moderate terrorists FSA and Turkey had been engaged in organ trafficking of Syrians, in 2013, and that the White Helmets had taken over, according to several Syrians, speaking from a newly liberated Aleppo. 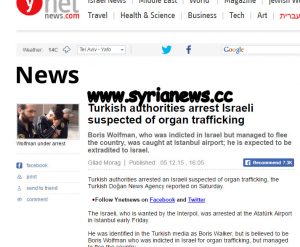 At this writing only one mainstream medium has reported on Diplomat al Ja’afari’s statement at the UN. Germany’s the Algemeiner’s headline of 13 April claimed that Syria Accuses Israel and US of Supporting Islamic State Terror Group.

In a rather Twilight Zone fashion, though, the caption under the photo is dated 20 April:

This NATO medium report, of course, chastises Syria’s Permanent Representative to the UN — still under the Obama State Department restrictions inflicted upon him for purpose of censorship —  for having the temerity to tell the truth.  In its zeal to keep in line with NATO msm anti-Syria propaganda, it completely ignored that Israel had already admitted to treating wounded terrorists with state of art medical surgeries.  In its expected fervor to insult the Syrian Arab Republic, it has also insulted Israel’s own reports, and not simply the one article from May 2015 (perhaps a few thousand Mercedes should be offered as reparations?).

On 8 December 2015, the UK’s MailOnline published a report titled, Israeli commandos save Islamic militants from Syria.

This MailOnline report is unique, in a kafkaesque kind of way:  Israel, whose military decrees what may and may not be published, invited the British journalists into Syria to watch emergency state of the art medical surgeries on terrorists who murder Syrians and then into Israeli hospitals for further follow-up reporting — providing the identities of the barbarians be kept hidden from public view.  That the author was given the very ugly statistics of costs and numbers, serves as yet another affront by Israel, to the people of Syria.

According to the report, since 2013, more than 2,000 terrorists have been treated by Israel, at a cost of more than $137,239,952.  According to the report, at least 80% of those given free, state of the art medical care have been men, men of fighting age. The author was not privy to how Israeli troops illegally on the Syrian Golan coordinated with terrorists, to pick up the seriously wounded, but he was meticulously in the lie that the terrorists were Syrian.  This, despite the fact that Israel offered him nothing in the way of identifying the human garbage, despite the fact that 360,000 foreign terrorists have invaded the SAR, despite — even — the fact that the European Parliament Think Tank issued a paper on Foreign Fighters in May 2015:  EU Member States are increasingly confronted with the problem of aspiring and returning ‘foreign fighters’.  Further worried, the EP updated the paper in March 2016, continuing to refuse to call the terrorist human garbage that it has dumped into Syria, that it has armed, ”terrorists,” while it worries they will survive the Syrian Arab Army, and return home, still filled with blood lust.

For every Syrian [sic] in hospital, there is one less bed for an Israeli…— IDF physician who is nonetheless happy to

friends with malignant sociopaths, via free state of the art medical care

One of the IDF physicians interviewed lamented a problem of state of the art medical emergency care, pointing to a belly wound:  When the terrorist felt well enough, he left (probably driven back into Syria by the IDF), and there was no way to follow up for potential complications.

A gut wound does have a myriad of potential post operative problems:  Ileus (peristalsis of the intestines simply stops, and can lead to rupture); infection, including periotonitis, if the abdominal cavity is not completely cleansed of fecal material intraoperatively; wound infection at the incision site; wound dehiscence; adhesions (internal overgrowth of scar tissue) — all of which are life-threatening.

How does the profound empathy of the IDF medical professional not extend to the Syrian people, who have endured the unfathomable atrocities of the terrorists for whom he has such concern?

The care given to child-beheading, oven-baking, mass-murdering terrorists, by the physicians of the Israel “Defense” Force are truly, stunningly, state of art medical surgery.  Below, this half-dead monster is intubated to prevent aspiration (fluids, especially blood, getting into his lungs and drowning him internally); he has had a jugular (probably external) central venous catheter inserted for emergency medications; has had a chest tube insertion attached to a mini-pleuravac to help re-expand his collapsed lung (most likely a hemothorax).

This savage will require a minimum of two months of intensive physical rehabilitation in this Israeli hospital.  His external fixator shows five screws, meaning that his femur was shattered.  He also has a vacuum assisted closure (vac) device helping to suck air from the black sponge over an anterior thigh wound, to help compress and heal.

Though Ambassador al Jaafari pointed to Qatar as the source of funding for Israel’s state of art medical care for alQaeda terrorists, the US taxpayer may also be picking up part of the tab, as the US subsidizes Israel to the tune of more than $3 billion per year.

Of course Qatar would pick up most of this tab, as many of the terrorists are on Qatar’s payroll.  Qatar’s al Khanzeera was part of the gang that slaughtered the Syrian men of three Latakia villages, and kidnapped the women and children (58 of whom were recently freed in exchange for incarcerated terrorists).  It is Qatar’s al Khanzeera who does much of the public relations work of the CIA death squads in Syria, the White Helmets. It was Qatar that promised safe passage for the hostages of Fouaa and Kafraya, in exchange for the safety of their terrorists.

Hundreds of Syrians attended the mass funerals for the martyrs of al Rashidin, those massacred after finally being freed from two years and three months of being held hostage in Foua’a and Kafraya,  by the terrorists given state of art medical care by Israeli Drs. Mengele.  NATO scum media did not use the word “terrorism” when reporting on their slaughter. 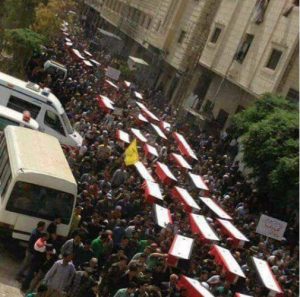 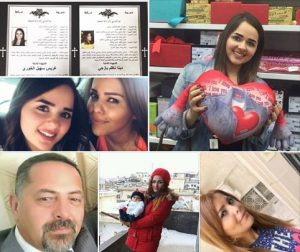 We health care providers are professionally and morally obligated to care for the injured and the sick.  We care for all with the same standard of care, without judgement, malice, or any other form of prejudice.

Such obligation does not involve bombing countries, invading countries to rescue terrorists, heal them, and send them back to slaughter more innocent persons.

Violent criminals are arrested.  They are treated while under arrest, and when they are recovered, they are incarcerated until their trials.

You monster physicians, paramedics, and medics of the IDF, who commit slow genocide against the Palestinians you occupy — against international law — extend your war crimes into Syria. Do not dare delude yourselves that you are “humanitarians.”  You are the fiendish descendants of Mengele.  May the skies above your heads be copper, and the earth under you be iron.  May you suffer the burn of pulsa denura.